You are here: Home / Blog Cruise / 10 Ways to Keep Cool When It’s HOT Outside!
I make commissions for purchases made through links in this post. For more information please see our disclosures page.
Please share!

Baby, it’s H-O-T outside! The temps this summer have smashed many records. This was our weather this past weekend. Saturday actually made it up to 107 .  .  .

Like many of you, we’ve had day after day after day with temps in the 100s. For about 2 weeks now. I don’t think I’ve ever seen anything like this in my entire life.
It makes me grumpy. It makes me hurt. I don’t like to sweat. I like my days to be a nice 75 degrees. This heat has got to go!
Ben is an outdoors-loving kid. He can easily spend most days from morning til night exploring, riding his bike, skateboarding, and just playing outside. This heat wave has put a damper on his fun BIG time. Not because he cares, but because I worry. He hates that I don’t let him outside all day. He despises be stuck indoors so much.
Honestly, I don’t like being stuck inside all the time either. So we’ve had to be somewhat creative with ways to spend time outdoors, while being as safe and comfortable as possible. I thought I would share some of our tips with you today. 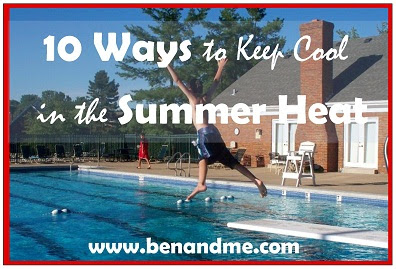 1. Take advantage of the cooler times of the day. The hottest times are usually from noon to 6pm, so make it a priority to get outside early in the morning or later in the evening. Ben has been out riding his bike most mornings, and we’ve managed to eat dinner out on the deck a lot of evenings. I’ve been having my quiet time out on the deck in the early mornings. It’s still not what I would call “cool,” but it’s certainly bearable.
2. Wear loose-fitting, cotton clothing in light colors. The reason is simple — they’re just cooler. And they breathe.
3. Play in the water. We are blessed to have a neighborhood pool, but it’s really too hot to even go there. The water feels like a hot bath. But, because keeping our plants, trees, and flowers watered has been a necessity, Ben has been awarded the task of watering them a couple of times a day. He usually does it in his swim trunks. And yes, he waters himself as much as he does the flowers. Mission accomplished x 2. 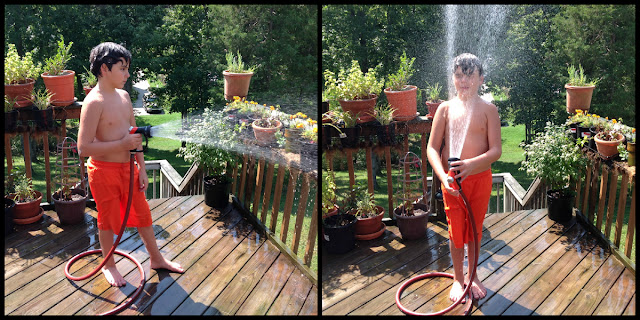 4. Stay hydrated! Keep some water bottles in the freezer. Then grab one on your way outside. It will take some time for the the ice to melt, so you’ll have nice, cold water to quench your thirst and cool you down. You can do the same with sports drinks, for added electrolytes.
5. Take a cool shower. If you’ve been outdoors in the heat and start to feel like you’re getting overheated, head back inside for a nice cool shower. It will feel great and cool your temperature down quickly.
6. If you’re going to be outdoors for awhile, fill a cooler with icy water and add some hand towels. You can quickly cool yourself off by wiping down with the cold towels. For several years, I drove a car that had a nonworking a/c. If we were out and about during the day, it could get pretty hot. One year, Ben was attending day camp, and I had to pick him up in the middle of the afternoon. It was July and temps were in the high 90s with lots of humidity. After the first day, I knew I had to do something. This was what I did. It felt great and Ben loved having an ice cold towel when I picked him up!
7. Stay in the shade as much as possible. It doesn’t matter what the temperature is, if the sun is beating down on you, you will get hotter. Wear a hat, too. It will serve to keep the sun off your head, and protect you from sunburn. While you’re at it, don’t forget the sunscreen. It won’t directly keep you cooler, but nothing will make you feel hotter more than a bad sunburn.
8. Have some fun indoors. Watch some movies, pop some popcorn, have a picnic, play some games, enjoy some family time.
9. Eat ice cream. Actually, you should probably eat ice cream year round. But it is especially tasty on a hot summer day. Popsicles, too.
10. Eat cold foods during meals. Not that you really feel like heating up the kitchen cooking anyway. But hot summer days are perfect for extra fruits, salads, and cold sandwiches. Take advantage of the built-in excuse you have not to cook for a few days! 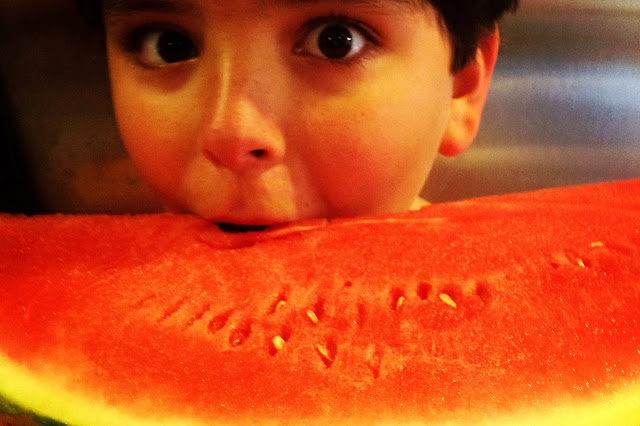