You are here: Home / Apps / AppSchooling: Math Apps
I make commissions for purchases made through links in this post. For more information please see our disclosures page.
Please share!

Math . . . the bane of my existence. If you read my blog much, you already know that. It’s not Ben’s favorite subject to learn, and it is not my favorite subject to teach. I am grateful for any help I can get.
Math apps for both iPad and Kindle Fire abound. There are some which are more instructional in nature, others are more sneaky with games. One of our favorites contains tutorial videos (and not just for math). This is in no way an exhaustive list of math apps. It’s not even a list of all of the ones we currently have. It is simply a list of those that Ben plays with over and over, or that I am more likely to assign as “school.” 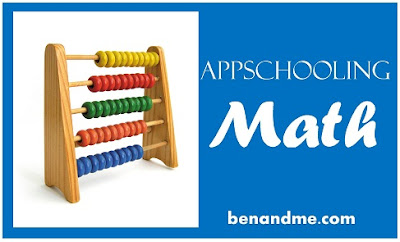 Khan Academy — iPad (Free) I could have placed this app in any of my AppSchooling articles this week because there are videos here for most every topic. We just happen to use it more for math than anything else. Khan Academy has over 3200 videos coverong a massive number of topics, including K-12 math, science topics such as biology, chemistry, and physics, and even the humanities with playlists on finance and history.
Spend an afternoon brushing up on statistics. Discover how the Krebs cycle works. Learn about the fundamentals of computer science. Prepare for that upcoming SAT. Or, if you’re feeling particularly adventurous, learn how fire stick farming changed the landscape of Australia.
Math Expert — iPad/iPhone/iPod Touch (addition and subtraction are Free, all others are $0.99 each and in-app purchases) From the publisher of Math Essentials — It doesn’t matter whether you are in fourth grade or in college. You need to be able to recall math facts quickly. Math Expert will help you to become a math facts whiz. You will be amazed how fast you can become with practice. It’s fun and exciting. Compete against yourself, your friends, and your family. After practicing with Math Expert you will never have to stop in the middle of working a math problem and try to remember a math fact. They will pop into your mind automatically. You will have them memorized by heart.
Geoboard — iPad/iPhone/iPod Touch (Free) The Geoboard is a tool for exploring a variety of mathematical topics introduced in the elementary and middle grades. Learners stretch bands around pegs to form line segments and polygons and make discoveries about perimeter, area, angles, congruence, fractions, and more. This virtual version of the manipulative is an open-ended educational tool.
Mulitplication Genius — Kindle Fire (Free or $0.99 for no ads) Help your kids to master 12 Times Table! Practice mode help your kids practice multiplication step by step, they can choose which Time Tables they want to practice.Manic Math — Kindle Fire ($0.99) The game logic is incredible simple! Just combine two numbers and one math operation to match the proposed objective. Manic Math is one fantastic application designed to keep your mind in shape. This healthy addictive game boost your mental arithmetic ability as well as your concentration, focus and memory

Numerosity — iPad (free) Skruff, the streetwise dog, is always at hand as a cheeky companion. The player is engaged in a race against the clock to help Skruff learn math by rearranging as well as dragging and dropping numbers into their correct positions. This places students directly in the driving seat and allows them to figure things out on their own, rather than spoon-feeding them information.

The following apps are all created by the same company. These are the highest quality math apps (not games) for teaching math operations I have seen. We have them all and any of them easily work with our usual math program, or completely substitute for our usual math program on any given day.
Long Multiplication — iPad/iPhone/iPod Touch ($3.99) The Long Multiplication math app can be used to teach and study the long multiplication method.
Long Division — iPad ($3.99) The Long Division app can be used to teach and study the long division method. Solving long division problems is also excellent subtraction and times tables practice. The app is easy to use and it has an intuitive interface with customizable colors and other settings. The user can solve custom and random division problems with small and large numbers.
Fraction Math — iPad/iPhone/iPod Touch ($3.99) The Fraction Math app can be used to teach and study fractions by solving addition, subtraction, division and multiplication problems with fractions step by step. The Fraction Math app can handle positive and negative fractions, improper fractions, whole numbers and mixed numbers. The user can also reduce the resulting fractions. Based on customer feedback this new version has the option of using custom problems where the user can input his/her own fractions, mixed numbers, and whole numbers. The app has also an illustrated glossary of the most common terms.
Read my review of Fraction Math.
This company also has apps for Addition and Subtraction. We don’t have these apps on our iPad, but judging from the quality of their others, I feel I can wholeheartedly recommend them.
This app is also created by this same company, but is less instructional and more of a game. We still like it, but it’s different than the above apps.
Visual Multiplication Table — iPad ($3.99)  Explore and learn the multiplication table in a visual way. Four different ways to study the multiplication table:
– Table: Explore the multiplication tables.
– Groups: See the multiplications as visualizations.
– Multiples: See how each number has an unlimited number of multiples.
– Solve: Scramble and solve the multiplication table.
The following apps are more “games” than instructional apps. We still find them useful, but they are not as likely to be used for school. More for extra fun in the car or waiting for an appointment, to reinforce math.
Rocket Math — iPad/iPhone/iPod Touch ($0.99) Math can be fun! Build your very own rockets and fly them to the stars with Rocket Math! While your rocket is floating weightlessly in space, the real fun begins! Play one of the 56 different math missions. Each mission has touchable objects floating in space, including stars, coins, clocks, 3D shapes and even pizzas! Earn a bronze, silver or gold medal and also try to beat your high score. Missions range in difficulty from even/odd numbers all the way to square roots, so kids and their parents will enjoy hours of fun while learning math.
Math Bingo — iPad/iPhone/iPod Touch and Kindle Fire ($0.99) The object of Math BINGO is to get a pattern of five BINGO Bugs in a row by correctly answering math problems. Choose from 4 games: Addition, Subtraction, Multiplication and Division. Choose from 3 different levels of difficulty: Easy, Medium and Hard.
Original Yahtzee — Kindle Fire ($0.99)
6-Dice Yahtzee — Kindle Fire ($0.99)
I hope you find at least some of these apps useful for your own homeschool. Since most of them are free for the downloading, you won’t lose anything by giving them a try.
For more of our favorite apps, visit my page called iEducation for the Homeschooler. Or to search by subject, click over to:
Appschooling: Planning and Organization
Appschooling: History and Geography
Appschooling: Language Arts
Appschooling: Science