You are here: Home / Field Trips / Birds of the Everglades
I make commissions for purchases made through links in this post. For more information please see our disclosures page.
Please share!

Last week, I share about the “keeper of the Everglades” — the alligator. This week, I want to continue sharing about our recent vacation to Florida, specifically to the Shark Valley part of Everglades National Park.
Next to the alligator, the most popular creatures found in the Everglades are the all of the wonderful birds. The shallow waters of the “river” of the Everglades draw many species — more than 350, sixteen of which are wading birds. In the few hours we spent exploring the Everglades, we saw several wading birds, including the Great Blue Heron, Snowy Egret, White Ibis, Black Ibis, Wood Stork, Anhinga, among others. I wish I could somehow share the sounds of the Everglades with you. It was thrilling to hear all of these different bird calls.
The largest of these birds is the Great Blue Heron. We saw many of these regal birds during our explorations and tour of the Everglades. They are just gorgeous!
The Great Blue Heron grows to between 36-55 inches tall and it’s primary food is fish, but it will also eat other aquatic animals like crabs, shrimp, reptiles and amphibians, using it’s sharp bill to spear the prey and then swallowing it whole.

My favorite bird we saw was the Anhinga. These wading birds, also called Snakebirds, differ from the others in that they actually swim with everything but their heads submerged under the water. Their heads look a bit like snakes ready to strike as they skim the water searching for food. Anhingas do not have the same oils on their wings as ducks, which keeps them from being buoyant on top of the water. This also means that their feathers become waterlogged. It is not uncommon to find them perched near the water, wings fully expanded, drying in the sun. They are unable to fly again until their wings are dried. 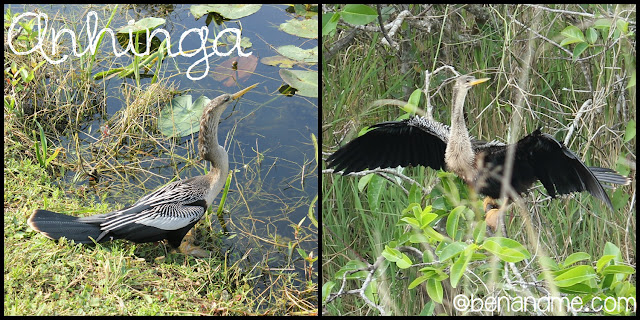 Another we bird we saw often, in the Everglades, and then poolside at our hotel in Key West, was the White Ibis. The ibis is a non-visual forager, meaning it does not look for prey with its eyes. Instead it forages for food in shallow waters, feeling for small fishes and crayfish with its beak. I was so excited to see and capture a photo of a juvenile White Ibis, with it’s gorgeous brown and white plumage. You can’t see it well in the photos below, but these birds have the most beautiful bright blue eyes! 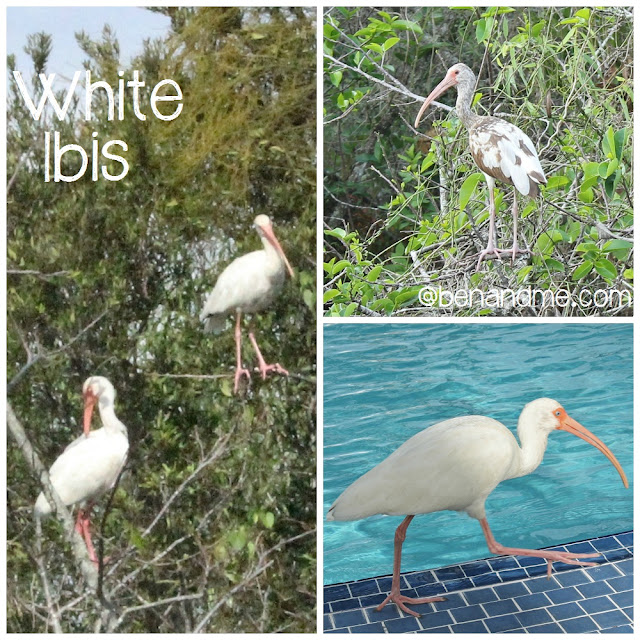 The Everglades is also home to the regal Snowy Egret, a small bird of the heron family. Like most birds of the Everglades, the Snowy Egret is protected by the Migratory Bird Treaty Act. There was a time they were in great demand by hunters for their beautiful feathers, used in lady’s hats.
Like many of the wading birds of the Everglades, these birds are prime prey for the alligators residing there. I wonder if this little guy below had any idea how close he was to his most common predator? 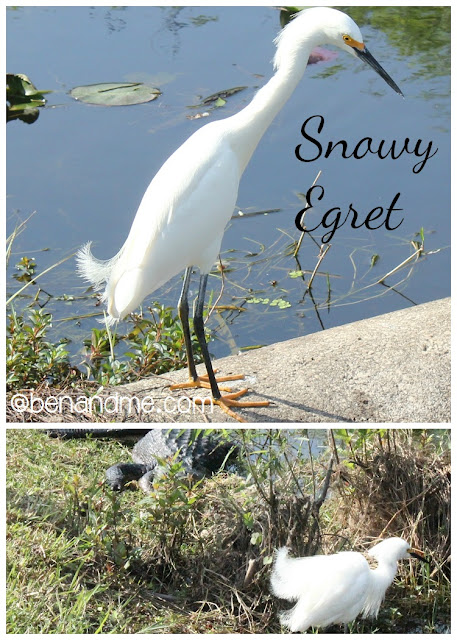 The last bird I want to show you is the Wood Stork. It is the largest wading bird native to North America and the only stork seen in the United States. The Wood Stork is one of the few birds of the Everglades on the list of Endangered Species. We were very privileged to get to see some. The reason for this sad news is habitat destruction. You can read more about that here.
According to Wikipedia — “To feed, the wood stork typically wades in shallow water, stirring the muddy bottom with its flesh-colored feet and partially opened bill. Once a small fish contacts the interior of the beak, it is snapped shut in 1/40 second, one of the fastest reflex actions known.”
Watching this bird hunt for food was very interesting. He would stick his head under water to scoop fish into its bill, while simultaneously opening one of his wings. Our tour guide told us they are unsure why they feed in this manner, but I am on a search for answers! 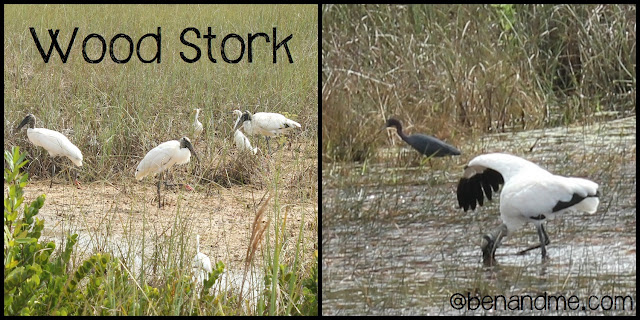