You are here: Home / ABC Blogging / Visiting Historic Cave Hill National Cemetery
I make commissions for purchases made through links in this post. For more information please see our disclosures page.
Please share!

Memorial Day was one week ago. Each year, on this solemn day, Ben and I visit one of our local national cemeteries. Last year, we visited Zachary Taylor National Cemetery, the final resting place of the 12th President of the United States.

This year, we made the choice to visit one of the oldest cemeteries in Kentucky — Cave Hill National Cemetery. My husband had been told by his aunt that his great great grandfather, John Harrison Bemiss, a Conferderate soldier during America’s Civil War was buried there. We decided that finding his grave site would be an interesting lesson in Ben’s family history, not to mention the history of Kentucky. Because Cave Hill is such an old cemetery, there are many people buried there who are notable in Kentucky’s history. A quick online search of the Cave Hill’s database revealed the placement of John Harrison Bemiss’ final resting place, and with a quick stop at the entrance gate, we were armed with the other crucial item we would need — a map of the grounds.

Few perhaps none, save those who have trod the arduous paths of the profession can picture to themselves the array of attributes, physical, mental and moral, the host of minor graces of manner and person essential to the making of a truly great physician. His constitution needs must be of the hardiest to withstand the constant shock of wind and weather, the wearing loss of sleep and rest, the ever gathering load of care, the insidious approach of every form of fell disease to which his daily round of duties momentarily expose him. Free and broad should be his mind to seek in all departments of human knowledge some truth to guide his hand; keen and delicate the well-trained sense to draw from nature her most treasured secrets, and unlock the gates where ignorance and doubt have stood sentinel for ages. How fine his fibre who hears the querulous murmur of the sick man only to soothe the fretful brain with loving kindness, to meet impatience with cheerful patience, and bring back the troubled heart to peace by tender sympathy. Far more than all, how greatly clothed with moral strength must be the man who could involve himself in all the woful [sic] secrets of humanity, and cross the paths of slander and reproach with soul unspotted. With what great purpose must he move, when in the hour that pestilence and death brood everywhere he leaves his vantage and goes down, not to the historic plan where watchful eyes and martial pomp and fame’s loud trumpet make danger glorious, but to the hidden lair in which the unseen foe lies crouched for mortal strife.

Online information about John Harrison Bemiss  is less evident. It appears that he was also a physician, but his birth date would indicate he was too young to have served in the Civil War. My feeling is that his information was confused with that of his father. I did find this brief excerpt about him in the Alumni news of the University of Virginia. We have some digging to do to find out more about him and also the grandfather of Samuel Merrified Bemiss, who apparently served in the Revolutionary War. All of this is very exciting to my American history-loving boy! 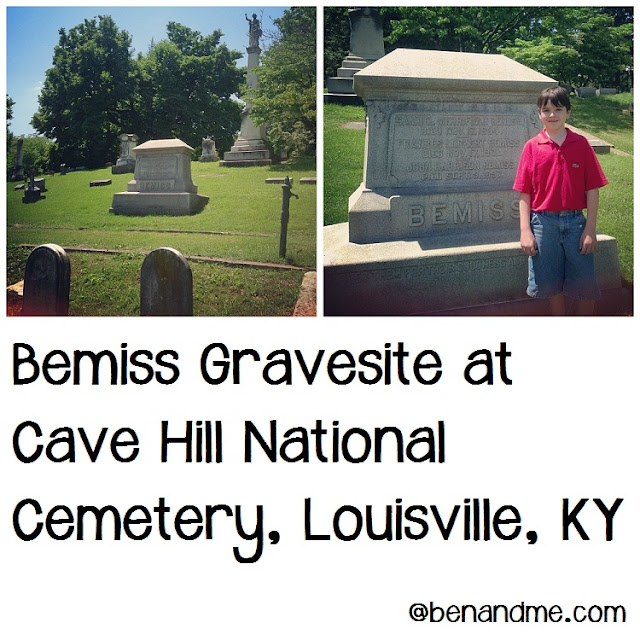 After visiting this family grave site, we headed over to the traditional “national cemetery” portions of Cave Hill. Here, you’ll find Confederate and Union soldiers buried side-by-side, a rare finding in cemeteries and indicative of Kentucky’s “border state” status. There had been a quick ceremony earlier in the day to remember all the soldiers buried here, but unfortunately, Ben and I did not arrive in time to share in that special moment. We did have some great conversation ourselves though — about liberty and showing respect to those who have lived and died for it. 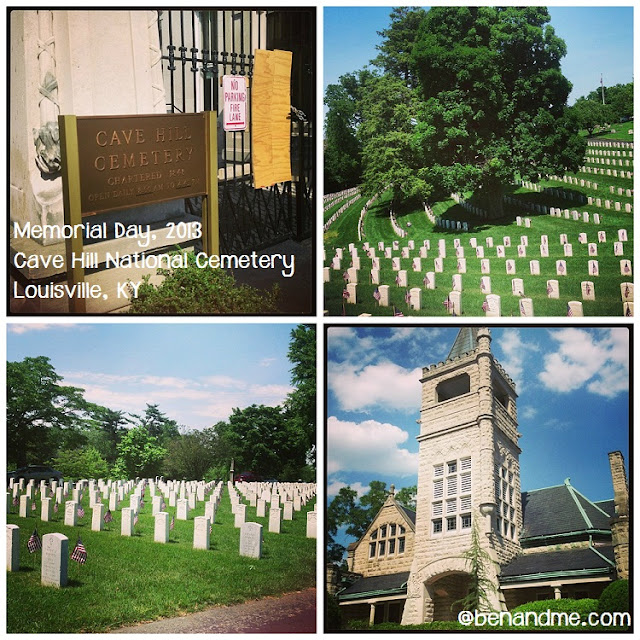 Our next stop was at the grave site of Kentucky’s most famous resident — Colonel Harland Sanders (of Kentucky Friend Chicken fame). You can’t really visit Cave Hill without stopping by here. While the Colonel was not a military Colonel, he is certainly a part of Kentucky history and who doesn’t love friend chicken?

Our final stop at Cave Hill was a visit to the resting place of Ben’s grandmother, who died when he was just two years old, and his great grandparents. Even though Ben doesn’t remember Grandmama, he knows her from the many stories we have shared with him about her and how much she adored him. 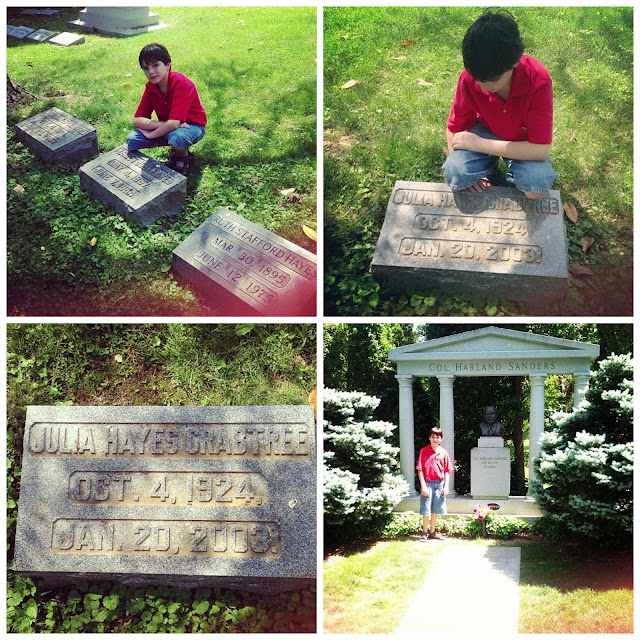 The city fathers did not have a cemetery in mind whenthey acquired part of the old farm that the Johnson family had called Cave Hill. The farm had a good spring emanating from a cave, but its stone quarries were of principal interest, particularly because the proposed Louisville and Frankfort Railroad was supposed to run through the property. As almost an afterthought, a few flat acres were to be surveyed off to balance the burying privileges at the west end of Jefferson Street.

Years went by and it became evident that the railroad would skirt the quarries. The fields were farmed by lessees and the old brick house built by the Johnstons became the City’s Pest House—an isolated home for patients displaced and suffering from eruptive, contagious diseases. 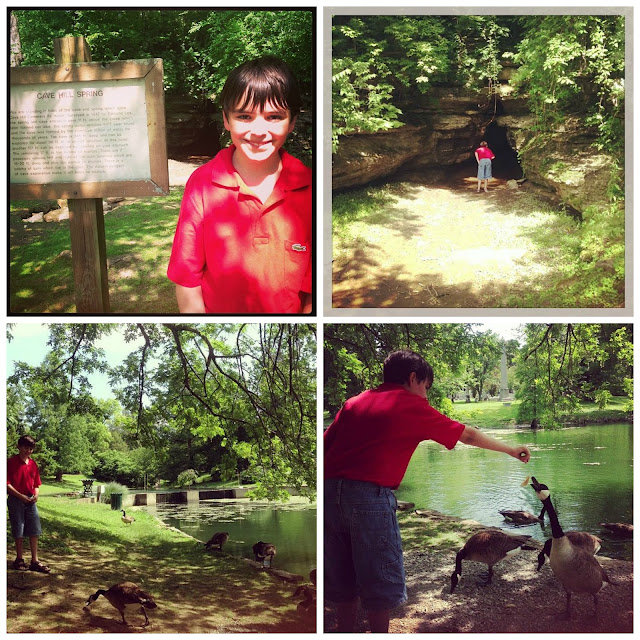 Chartered by the General Assembly of Kentucky on February 5,1848 for the purpose of operating a rural cemetery. Cave Hill was dedicated in July of that year and the transition of Cave Hill Farm into a beautiful and historic cemetery began. I’ve taken Ben to Cave Hill often since he was little guy, mostly just to feed the ducks. This was the first time we had visited with touring the cemetery from an historical perspective. I think we both found it a meaningful and solemn occasion, as well as educational. Of course, we did have to stop and feed the ducks, too. Well, except there were more geese than ducks this time. If you are ever visiting Kentucky, a stop here will be well worth your time. It is really a beautiful cemetery. In fact, Ben’s exact words were, “you know, mom, if it wasn’t for all the grave sites, it would be like a park here.” Liberty comes to life when you stare across a field of 100s (1000s?) of marked grave sites, knowing that each of them represents the life of someone willing to fight for the freedoms we all enjoy today.  Be sure to research your own state for historical cemeteries. Most will have have a map listing those important to your area’s history as well. While it’s not the usual history museum field trip you might be accustomed to, visiting will be a great starting point for learning more about those who had the greatest impact on your state’s history. And maybe even the history of your very own family.

« 30 Days of Prayer for Our Kids — June Edition
Staycation Louisville — 10 Day Trips In Near Louisville, Kentucky + 20 Must-See Places in the City »