You are here: Home / Chronic Illness / Lupus and diet: I think I can say I’m vegan now.
I make commissions for purchases made through links in this post. For more information please see our disclosures page.

As some of  you my know, I was diagnosed with fibromyalgia about 10 years ago and then lupus about 6 months ago. I was started on a medication regimen in January that included Plaquenil (for immune system suppression), Relafen (for inflammation), and Cymbalta (for depression and fibro pain). Actually, the Cymbalta came about a month into the Plaquenil. I’m not one who is prone to depression, so when it hit me, it took a bit to figure out why exactly I didn’t care about anything going on around me and preferred to just pull the covers over my head. I believe the Plaquenil was the culprit in that scenario, but my rheumatologist said it wasn’t likely and that probably just the lupus diagnosis (along with the deaths of my uncle and 2 friends within a month) was just more than I could handle. Frankly, I think if I could handle several years of infertility, and the treatments to combat that, without depression, I can probably handle this, but what do I know?

Anyway, moving on. After being on these 3 medications for a couple of months, we began what I have come to refer to as the “spring from hell” at our house. For 2 solid months, at least one, if not all, of us was sick. I was the sickest. During this time, I was treated twice for bronchitis, plus strep and shingles. Ben got chicken pox from exposure to my shingles, plus the flu. Tom also got the flu, followed by a nice case of pneumonia, and various other viruses vacationed here for awhile. It was horrible. I don’t think I had more than a total of 10 days of reasonable health during the months of Feb, Mar, and Apr. By May, I was at my wit’s end. On a positive note, my joint and muscle pain were improving. Of course I had been given 2 rounds of steroids during this time? Oh, the joys. I’m not sure my family would say that the freedom from pain was worth having to live with a mom on steroids!

Thankfully, by the time we took a 2 week trip to Washington, DC, Williamsburg, and Virginia Beach, Ben and I were reasonably well, although Tom was sick the entire time we were gone. It was during our time at the beach, when I finally had a few moments of rest and relaxation, that I also had a moment of clarity. I had been praying for weeks, months even, for answers as to what to do about treatment for the lupus. Between the depression, constant illnesses, and never-ending nausea, I couldn’t imagine living like this, and just cried out to God for answers about what to do.

One evening, when I was in the hotel surfing around the internet for alternative therapies, I happened upon this website. I ordered the book and when we returned home, it was waiting for me. I read it in less than 2 days, and although I was a bit skeptical, I decided I would at least try to follow this plan, which is basically a vegan diet. The book is filled with testamonials from people who have overcome all kinds of autoimmune diseases such as lupus, rheumatoid arthritis, and fibromyalgia by eating a plant-based diet. 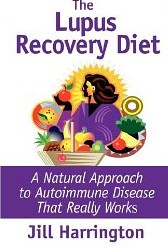 I was leaving again in just a week, to attend my high school reunion, so I decided I would begin when I returned. The idea of trying to get through eating vegan at my reunion and while staying with friends and family in Arkansas seemed too much to deal with. But just a couple of days later, I felt this strong tug to begin right away. So, I did. On Saturday, June 4, I officially became a vegan. Except it was hard for me to say that. I think because I wasn’t sure how long I would be able to do this.

Oh, and did I mention, I went ahead right away and weaned myself off all of my medications (even the ones I take for allergies and asthma)? That wasn’t initially in the plan. The plan was to eat plant-based for several months, giving my body time to heal with the foods, then stop the medications. But again, there was this prompting I couldn’t ignore, so over the first 10 days or so of the new eating plan, I weaned off of everything.

A couple of weeks into all the changes, I had a scheduled appointment with my rheumatologist. I really like Dr. June. She’s professional and compassionate and listens to me. I’m pretty sure she wasn’t happy that I was off all medications, but she didn’t show it. She just said she would like for me to be on something similar to Plaquenil, to protect my organs. She understood that living every day with nausea is as miserable as the disease. So she wrote a new Rx, which I have yet to fill. I’m going to wait until my next appointment in 6 months to see how I’m doing. I hope I’m able to knock her socks off with the great decrease in my symptoms and awesome blood work! If that doesn’t happen, I’ll have to re-evaluate.

So now it’s been about a month. I can’t say that I feel well. All of the joint and muscle pain has returned and I have had one migraine. I’m pretty tired most of the time, and it doesn’t take much activity to wipe me out. I know that I must be patient, and that I also need to make some more changes to reduce stress and increase my rest/sleep. Diet is not the only answer. So I am working on all of these areas.

My rheumatologist suggested that I might want to think about putting Ben in school, though she admitted to knowing that wouldn’t be something I would consider. I have stepped down from leadership in the co-op I helped start last year. In fact, Ben and I aren’t going to attend at all. The spring semester was very stressful doing the extra lesson plans, having to be there early in the morning every Friday, when I hadn’t slept much, and then just being wiped out from being there all day. It usually took the entire weekend to recover, which took precious time away from us as a family. Ben really wanted to play football this year, but the commitment to get him to practice 4 nights a week and a game every Saturday was just too much. It was so hard to say “no” to him about that, he has begged to play football for a couple of years now. But hopefully this is just a season. He’s been very sweet and helpful and he took the news well, but I know that’s because he worries about me. That makes me incredibly sad.

Now that these changes have been made, I am hopeful. Eating a vegan diet has been pretty easy so far (even at my reunion). I never ate much meat and cutting out dairy hasn’t been nearly as difficult as I thought it would be. I know that God is just taking away any possible cravings from me, though I do admit it would be much simpler if I could get Tom and Ben on board. 🙂

On the plus side, I’ve lost 15lbs. It’s a drop in the bucket for what I need to lose, but losing that has been pretty effortless, so I’m just thrilled about it. Hopefully that nice side benefit will continue!

I’m curious if any of you living with autoimmune diseases have tried dietary changes as treatment? The more research I do, the more I read, the more convinced I become that this is at least a part of the answer. I’d love to hear what your experiences are!

More to come later. I think this blog post is long enough for now. Thank you for reading, if you made it this far!