You are here: Home / Delight-Directed Learning / Meet Snappy Racer – our box turtle friend
I make commissions for purchases made through links in this post. For more information please see our disclosures page.
Please share!

Ben and I have been spending quite a bit of time doing some decluttering in his bedroom and schoolroom, which hasn’t left us as much time for fun.
But just when all seemed hopeless, we had one of those delight-directed moments when Ben was out in the back yard exploring.
Meet Snappy Racer ~ 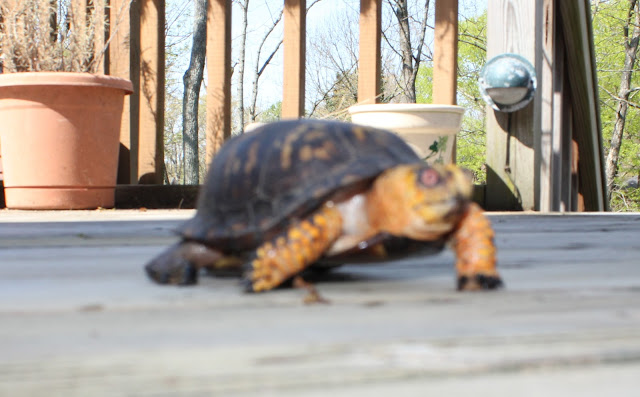 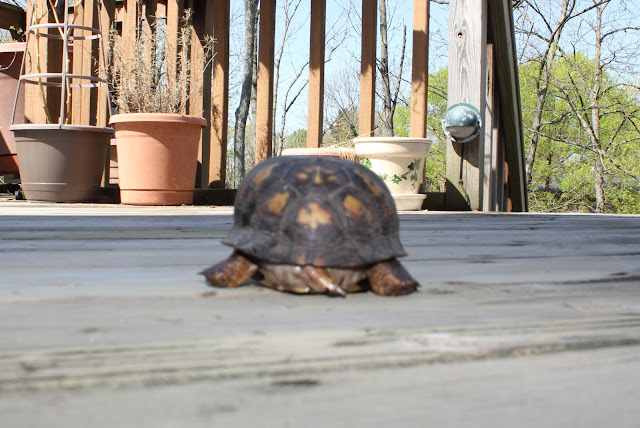 Sorry the pics are out of focus a bit. Ben took them not realizing I had set the camera on manual focus.
Anyway, Snappy Racer is an Eastern Box Turtle. They are fairly common in Kentucky, but we were surprised to find that they are on the endangered species list. Apparently we are destroying their natural habitat with all of our buildings. For that reason, it is illegal to sell box turtles in Kentucky. And because it is close to mating season, we didn’t our friend to miss out on his chance to make a family, so we only kept him for a few days to observe him, and then let him go.
We discovered through our research that Snappy Racer was male (red eyes), that he can live up to 100 years, and he is a reptile. In our readings, we found out that it is not a good idea to paint his shell (so that if we see him later we would know it’s him), so Ben drew his shell pattern instead and took these pictures. These little guys generally stay within a 250 yard area, so Ben is hopeful he will see him again.
Conveniently, Ben found our turtle friend the day of co-op class, so we brought him along. Ben was given the opportunity to give an oral presentation and write a couple of paragraphs about Snappy Racer in his IEW class.
Ben leaned a lot more about Eastern Box Turtles, but we’ll give you the chance to research on your own for more information. We found this site very helpful in our turtle research, in case you’d like to read more 🙂

« Google Art Project
He is risen! He is risen indeed! »