You are here: Home / Adoption / On Becoming a Mommy — our miraculous birth story
I make commissions for purchases made through links in this post. For more information please see our disclosures page.
Please share!

When I was a little girl, it seemed grownups were always asking me what I wanted to be when I grew up. While most of my friends wanted to be a nurse or teacher or stewardess, I usually had a different answer.

I wanted to be a mommy. 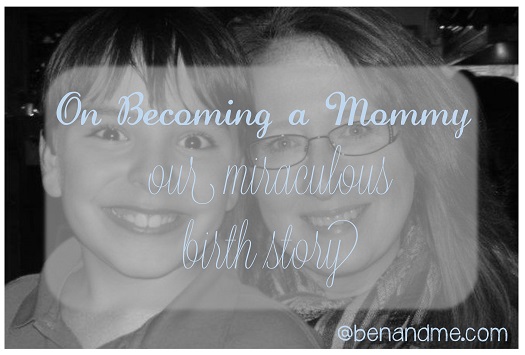 I used to make lists of baby names. I can even remember a few of the names on my list as a 10-year-old — Jillian, Adrienne, Rachelle for a girl. Jeremy, Christian, Jacob for a boy.
I loved playing with my dolls, and forcing my baby brother to pretend he was my little boy, while I “mothered” him.
By the time I was 13, I was everyone’s favorite babysitter. I remember my pastor’s wife telling me when I was about 15 that I was going to have lots of kids one day! As an adult, I worked as a full- and part-time nanny, babysat on weekends, took care of children while their professional parents traveled to conferences, took a few lovely vacations to help care for the kids, and patiently waited for my time to come. Loving on everyone else’s kids — that’s what I did best.
When would it be my turn?
I met my not-so-soon-to-be-husband when I was 26. By this time, I was finishing nursing school, about to begin my career as a labor nurse, and ready for marriage and family. Within a year, I knew I wanted to marry this man and begin fulfilling my mommy dreams. He was little slower getting there.
Fast forward seven (yes, seven!)  years.
I was now 33, nearly 34 years old and walking down the aisle to meet my Prince Charming. It was finally my day, my time.
My turn.
We had talked about kids a lot. Five was the magic number. If we squeezed them in quickly, we could make it happen by the time I was 40. Five kids in 7 years.
That was my plan. Our plan.
But was it His plan?
We hadn’t even considered His plan.
I immediately began plotting, planning, and charting. Having a husband who traveled all week meant I had to know when things were happening with my body. Sometimes, I had to drive a few hours to where he was to increase our chances. My life centered around my morning temperature and soon — peeing on a stick to see if I was ovulating.
After several months of obsessive diligence, I still wasn’t pregnant. I was now 34, timing everything perfectly according to the charts and sticks, so it made no sense to me. I should be pregnant. I was supposed to be pregnant. With every passing month, I was more determined, but less hopeful. Maybe 4 kids would be enough?
Seven months after my wedding day, I made an appointment with an infertility specialist. A consult and few embarrassing tests revealed some issues, that while not impossible, would make things more difficult for us. It was recommended that I take a medication to ensure ovulation and that we have a procedure called intrauterine insemination (IUI) to increase our chances for success.
That began a nightmarish 3 years of  procedures, injections of hormones, a change of doctors, 8 IUIs, 2 surgeries and 4 in vitro fertilization (IVF) procedures. My days that had been previously controlled by morning temperatures and peeing a stick became overrun by frequent blood draws, invasive ultrasounds, constant visits to the doctor, and ultimately, one disappointment after another.
I was watching my dream slip away. Would I ever have a baby. Just one?
Three and a half years had gone by at this point. I was now a 37-year-old-mommy, without a baby. We had created embryos, lots of them. They had been placed inside my uterus on three different occasions by this point, and every time — failure. My babies didn’t stick. I needed them to hang on. To cling to me. Didn’t they know how desperately they were wanted?
I didn’t understand.
I had dreamed of, prayed for and even begged God for a baby. Of all people, I deserved one. I had cared for everyone else’s with a mother’s love. I was helping mothers bring their babies into the world on a daily basis. I was destined to be a mommy. I knew that in my heart from the time I was a little girl. Why was this happening?
Where are you God? You promised me the desire of my heart!
Our third (not our last, mind you) IVF procedure occurred in November, 2000. It was the day after Thanksgiving when we received what had become the dreaded call — “I’m so sorry, Marcy and Tom, it didn’t work. Your pregnancy test is negative. We can try again in a few months.”
This had become the story of my life. Heartache, disappointment, lost dreams, another Christmas without a baby or even the hope for one.
Tears. Lots of tears. And anger. Lots of anger. And why me questions. Lots of questions.
Exactly 2 weeks later, I would have an answer.
It was a Friday, just 2 1/2 weeks before another Christmas without a baby. A friend and I had spent the day at a local Christmas crafts show. I arrived home with my purchases in hand at around 5pm. As soon as I walked in the door, my husband said, “There’s a message on the answering machine you need to hear.”
I walked over with trepidation, unsure of what news I was about to learn, and pressed the red button on our answering machine.

Tom and Marcy — there’s been a baby born. He needs a mommy and daddy. Call me.

The message was left by a close friend of mine, also an Ob doctor where I worked as a labor nurse. She had received a call from a mutual friend working at another hospital. A young girl had arrived at her hospital that morning, given birth to a baby boy and stated she could not take him home with her. She had hidden the pregnancy, never received prenatal care, and had no adoption plan. Our friend knew that she needed to somehow connect this young birth mom to me.
It took a few days and a few miracles to make that happen. The state had already been called to come take custody, but with it being a Friday, no one had arrived yet. The delivery of this baby boy had been via Caesarean section, the baby had been transferred to the children’s hospital 30 miles away with respiratory distress, and the birth mom wasn’t going home before Monday.
No one was in a hurry to take custody.
Well, except for me.
I called the doctor who had delivered him and begged for his help. I didn’t know him and he didn’t know me.  He was not very willing. He had never been in this situation before and wasn’t sure where the legal (or moral) line was drawn. He agreed to take our phone number and tape it to her chart for CPS to see. Perhaps they would call. I knew better. We didn’t even live in the same state where the baby was born. They weren’t going to call a couple in a different state when they likely had a long list of awaiting couples in their own.
As the weekend went by and we heard nothing, our hope dimmed. I went to work Sunday night and addressed our Christmas cards during the slow times. On Monday morning, I dropped them off at the post office. There would be no baby announcement again this Christmas.
I arrived home at 8am on Monday morning, exhausted from another nightshift, weary from another disappointment. My husband was already at work, so I climbed into bed and was just about to close my eyes when I noticed the answering machine light blinking. I almost ignored it. Whatever it was could wait.
But it nagged me.
So I climbed out of bed and pressed the flashing red button.

Marcy! If you want this baby, you need to call me NOW! The birth mom is going home at 10am!

I called immediately. What had happened?

Her story still brings tears to my eyes. The doctor — the one unwilling to do much to help us — had a change of heart. He had been staring at our name and phone number on her chart every time he made rounds. On Sunday, he finally gave in to what I firmly believe was a prompting by the Holy Spirit. He whispered to my friend that he wouldn’t mind if that note ended up the hands of this birth mom.

And so it did. Along with a personal recommendation of our character, years of infertility, and desire for a baby. She, the birth mother, had tried to call me all Sunday evening. It was the days of dial-up and my husband had tied up the line while working on his laptop. She was eager to speak to me, my friend told me. Can I call her now?

We hung up and I made that call to this young woman, who had already made more than one difficult decision and now was prepared to make one more — the hardest one of all. We spoke for about 15 minutes. We had questions for each other and in the end, she agreed that Tom and I should have her baby. CPS showed up 30 minutes later to claim him, but she firmly informed them that she had made other arrangements.

I never did get to bed that day. I had lots more phone calls to make — my husband, my mom, lawyers, home study agencies, my close friends.

In a split second, sometime within a 15 minute phone call, I had become a mommy. Sleep could wait. There was a baby waiting at the hospital for me. 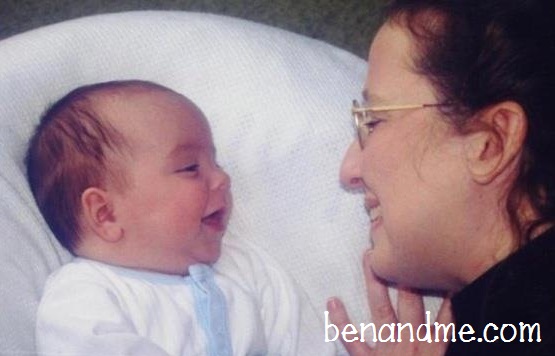