You are here: Home / Product Reviews / Project Genius Light from EEME
I make commissions for purchases made through links in this post. For more information please see our disclosures page.
Please share!

(this post contains affiliate links)
Thomas Edison was the kind of boy who learned by doing. It’s said that at 6 years of age, he burned down his father’s barn while trying to figure out how fire worked. He was homeschooled because in school he was usually daydreaming or in constant motion.  His teacher labeled him “addled,”  and his father thought he was stupid. Edison was distracted, disorganized, in perpetual motion, creative, and wildly imaginative. He loved experiments and his mother gave him free rein in that respect.
I don’t know if Ben truly has “the Edison trait,” but the description above is indubitably familiar. He, for sure, loves learning by doing, and I love being the kind of momma who gives him free rein in his areas of interest and passion. Ben would tell you that science is both for him.
I especially love it when a new company comes along that helps me do it well. So when I was contacted by a EEME (pronounced ee-mee), and given the opportunity to  review a hands-on electronics kit, I jumped at the chance.

Sounds like something Thomas Edison would have thought of doing, right?
We received the Project Genius Light, which arrived in a compact box containing everything Ben would need to complete the project — 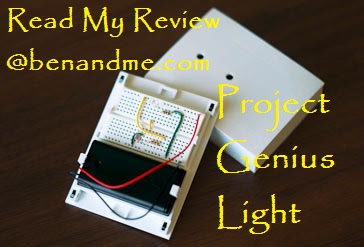 What you won’t find are written instructions. Don’t worry, you don’t need them because of the next component of this project — the video lessons.
Let’s begin there — the video lessons.
Every, single step of the project is shared via a one-hour video. The facilitator walked Ben through each step, while doing the project as well. You hear the voice, but all you see are hands doing the project. It made it very easy for Ben to understand what he needed to do, why he needed to it, and gave him a frame of reference if he missed a step along the way because he could just back up the video (which he did once). The whole time they worked on the Genius Light together, Ben was being fed information about each part, how it functioned, and how to be safe. 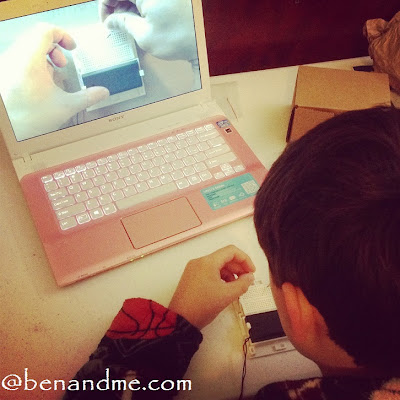 I’m going to back up for just a moment to what Ben actually did as soon as he logged onto the computer. I had just handed him my laptop and the kit and let him go. When he logged on to access the videos, he found a section there called “Learning Videos.” Within that section he found a free video series on how to use a multimeter, along with several projects in which the mulitmeter is used. We happened to have one from a previous electronics project (from about 3 years ago), so he immediately went to our science box to find it.
Before he even began the Project Genius Light, Ben went through several of the Multimeter Learning videos first, using the batteries from the Genius Light Kit. I stopped him before he continued on with other multimeter projects. I think we’ll save those for another day. I wanted to mention this though, so that you can go check out those videos, and if you have a multimeter, or don’t mind investing in one, you’ll have a completely free project right there, with more to come. You can access them by entering your email address on the EEME website. 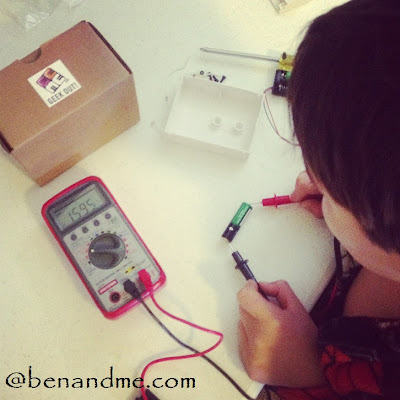 Now, back to the Genius Light. Ben completed this project in about an hour and was thrilled when it worked. As I mentioned before, he did do one step incorrectly, so at first the light did not work. He was able to immediately identify where he had made his mistake and correct it quickly.
He felt very accomplished to have done it completely on his own (even though his electronics-loving dad was in the other room), and very proudly showed it to him as soon as it was completed. 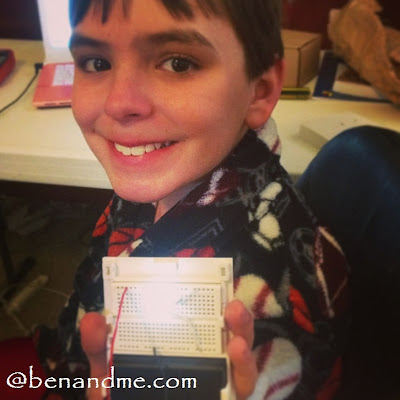 There are more projects available and Ben is excited to receive the next one. This is what he had to say about Project Genius Light:

I enjoyed it very much. I liked that I got to create something on my own, and it was fun. The videos were very good and really helped me understand how the light worked and fix a mistake I made. I also learned that lights like this are used in outdoor lights, and for safety. I think lots of kids will like doing this project!

So there you go. My little Edison approves and that’s good enough for this momma.
EEME offers an economical monthly subscription plan.  Projects are geared to kids up to about age 12, however, younger kids may be able to complete with a parents help.
Please share!

« Friends, Fasting, and a Fresh Start
The One Parenting Book Every Christian Parent Needs »