You are here: Home / Amanda Bennett Units / Sleepless thoughts….delight directed homeschooling…
I make commissions for purchases made through links in this post. For more information please see our disclosures page.
Please share! 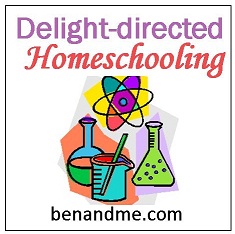 Sometimes when I can’t sleep, it’s because I’m lying there thinking too much.  I thought I would come write down the thoughts that are keeping me awake this time.

A couple of weekends ago, when I attended the Midwest Homeschool Convention in Cincinnati, I spent a couple of hours here and there hanging out at Amanda Bennett’s vendor booth.  It’s no secret that I’m probably Amanda’s biggest fan, but more than that I am honored to call her friend, which is why I could hang out so much at her booth. And because I am so passionate about her unit studies, I couldn’t be quiet when moms and dads wandered by, asking questions about unit studies, so I jumped right in to offer my 2 cents.

Friends, I was shocked and saddened at how many homeschooling parents had never even heard of unit studies, much less used them. But what saddened me even more was how often I heard phrases such as, “I’m about to give up,” “we have to do something different,” “we use such and such curriculum and it isn’t working.”

It saddened me because I’ve said every one of those things myself in the past few years. And I really thought, at the time, that I was the only one.  I looked around me and everyone seemed to be happily going about their perfect little homeschools, with diligent children who followed directions, never complaining, never bucking, and here I was feeling like I was sinking further and further behind every day.  If only I had known some of them were sinking, too, but no one wanted to admit that the boxed curriculum they had just paid $1000 for wasn’t working out so well.

It’s so hard, isn’t it?  So hard worrying about whether or not our kids are reading enough or we’re reading enough to them, whether or not it’s important to do history chronologically, to structure or not to structure, do we really need to teach Latin, and which math program should we use?  The choices are endless and one day in the vendor hall at a major homeschool convention will have your head swimming. I certainly don’t have all the answers, but I do know one thing…..it really doesn’t have to be so hard!

If you happen to be one of those families who has purchased the $1000 curriculum and it’s working out beautifully for your family, then God bless you, I am thrilled for you and you can probably stop reading now.  But if you’re like me and you hate to admit it’s not working so well, and you’re wondering if there is another way, then please read on.

I’d like to introduce you all to a style of homeschooling called “delight-directed.”  It’s not completely unschooling, so don’t get nervous (although I think unschoolers totally rock!), but it is similar in that you are allowing the interests of your children to dictate what is taught, to some degree.  To what degree is up to you. It works differently for each family, but I’ll share how it works in ours and why I love this method of homeschooling.

I should start by telling you that we have used a unit study approach to homeschooling on and off since preschool.  We started with Five in a Row when Ben was 4.  I struggled often with “is this enough?”  Crazy, huh?  He’s 4 and I”m worried that I might not be teaching him enough.  You have no idea how much I wish I could go back and do ages 4-7 over again.  During those doubtful times, I’ve tried a few other curriculum-in-a-box kinds of things, spending far too much money.  They always came with a nice schedule that we could never follow, and soon we’d be weeks behind, Ben wasn’t enjoying it, and I was frustrated and feeling like a failure.  Every, single time, I would revert back to unit studies.

You might be wondering why we got behind if I had this nice schedule to follow.  Well, it’s because of this little known phenomenon called, “rabbit trails.”  We could be studying about Mexico, the text would mention the migration of the Monarch butterfly, and off Ben would go into the land of butterflies.  You see, it was not enough to learn about Monarchs, he needed to know more.  He wanted to know about other types of butterflies, and “can we grow butterflies, Mom,” and “don’t they have butterflies at the zoo we could go see?” and…. well, I think you get the picture. Our detour into the world of butterflies might take us off course a few days.  That wouldn’t be so bad if that was the only time it happened, but it wasn’t.  I found myself either veering off course continually, or saying something silly like, “I’m sorry honey, we can’t learn more about butterflies, we have to start learning about China now…how about pandas, wouldn’t you love to learn about pandas?!?!”  Trust me, we spent more time on the rabbit trails, then we did on the scheduled curriculum.

So after a few years of being frustrated by rabbit trails, I wondered what it would be like to just take Ben’s interests and go with it…..homeschool by the “rabbit trail” method, if you will. And that’s what we’ve done for the most part.  Sometimes we still take detours.  For example, in the middle of learning about Space, Ben wanted to dive into the Olympics, and then maple syrup, and then the US Census. But guess what? This week, he’s back to space. And then there was week one, day one of the Horses unit that took us a week, because it mentions Egypt.  Ben just had to spend some extra time in Ancient Egypt that week.  We just got right back on track the next week, never feeling like we were behind, since there was no schedule to dictate when the next subject had to be started anyway.

The miracle of all of this is twofold:  first of all, Ben is learning so much. I mean it’s really sticking with him because his interest is there. And second, he rarely complains about doing school. Plus, now that I have finally made the switch to Teaching Textbooks, he doesn’t even complain about math.  I am finally one of those homeschool moms with the diligent child, who rarely complains or bucks the system! Yay me!!

Now I know you’re all wondering how to work Star Wars and Legos into your homeschool day.  I understand.  I have a Star Wars and Lego fanatic here as well.  But I do guide him a bit, or we would spend all of our time on topics that would be a stretch to seriously count as school.  But that’s the nature of my child.  Yours might be different.  I will tell you though that Legos are a phenomenal math manipulative! Even so, we mostly leave Legos and Star Wars to playtime.  But some day, some mom will write a unit study on Star Wars and I’ll be first in line to buy it!  Amanda, are you listening? Ha!

I’m sure you’re wondering how to choose what units to do, mostly because you’re worried about “holes.” Well, what I usually do is ask Ben every couple of months or so what he’d like to learn about next.  And if he’s struggling coming up with something (this is rare), I simply show him the list of unit studies Amanda has written, or come up with some topics that I really think he would enjoy, and that will spark interest.  Amanda has written lots of units about subjects boys love, so she has made things very easy for me.  And her new Download-n-Go series has been a huge hit as well.  If he has an interest she hasn’t written about (maple syrup, for example), then I either find a unit study someone else has written, or put a unit together myself.  Homeschool Share has hundreds of literature-based unit studies, with lapbooks to choose from.  You can find a unit on most anything your children will come up with there.  So find a unit and get started….it’s that easy!  And as far as holes go, I simply don’t worry about that.  Unit studies are so rich in social studies and science that I feel confident Ben is learning most anything he needs to know and so much more.

Oh, and one more thing…..don’t be afraid to move on, even if you haven’t finished your topic.  For my 3rd-grader, 2 weeks or so is usually his limit.  Space is the perfect example for us.  It’s a 4-week unit, but after about 2 1/2 weeks, Ben wanted a break to learn about some other things.  But he came back to it and now we’re finishing up that space unit study. This has happened more than once this year.

If I can do it, you can do it.  You still may be skeptical, but I beg of you to give it a try and see what happens.  And please, come back to tell me about it.  I want to hear your stories, too.