You are here: Home / Homeschool / The Presidential Game Review
I make commissions for purchases made through links in this post. For more information please see our disclosures page.
Please share!

How many of your children (not unlike mine) have ever expressed the desire to be the President when they grow up?
Well, now they can play a super cool game to win the most powerful job in the world. Let’s be honest here, that’s probably way more fun!
The Presidential Game is an award-winning board game of strategy, where 2 teams (Republicans and Democrats) battle it out for each state’s electoral votes. Just like the real Presidential election, whoever wins 270 of these coveted votes win the honor of becoming President. The best part? You don’t have to be age 35 to win the most powerful job in the world in this election. Anyone 11+ will enjoy vying for the title, even parents, making this a great game for the whole family. Honestly, if you have a bright, history lover a couple of years younger, they’ll likely enjoy it as well.
With the last election, Ben and I spent literally weeks learning about the election process with a very long unit study, listened to many debates, and on election night, his feeling about the end result was as real and emotional as the rest of us. He was fully invested in the elections process, so getting to review this game was like some kind of dream come true or something. I mean, the boy was ecstatic!
In our house, play began about 5 minutes after the game arrived, with Ben forcing me to be the Democratic candidate choosing to run on the side of the Republicans. Set up was quick and easy — components include a game board,  a two bags of game chips in red and blue (representing the votes), 6 dice (3 in red and 3 in blue), a set of Politics cards (including some blank “write-your-own cards), a score pad, and an access code to the online Webmap calculator. The instructions were a bit confusing, so I’m not exactly sure we played it perfectly according to the rules, but we worked it out. 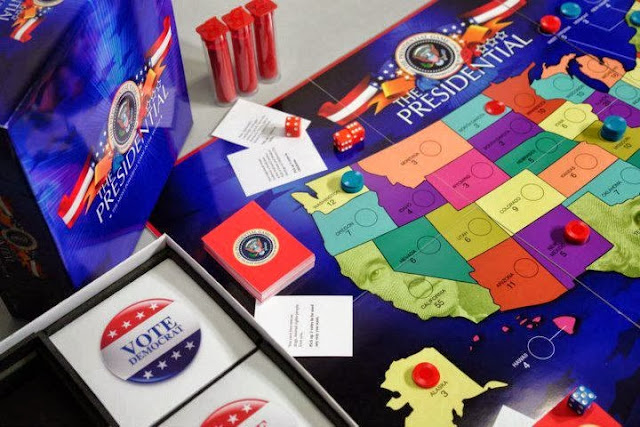 The idea the game is simple enough. Each team must strategize the winning (and keeping) of the electoral votes for each state by choosing to either Fundraise or Campaign. Fundraising must begin in one of four states — California, Texas, New York or Florida. After choosing which one of these states, a roll of the dice determines how many votes you will be awarded and at least half must go to your chosen state. The other half of the votes may be distributed in any state(s) you wish. Once the fundraising is over, a Politics card must be drawn. These cards are filled with actions that affect your votes — you may be awarded with extra votes, have some taken away, or perhaps your opponent will be affected.
Since I’ve already spilled the beans that Ben ran on the Republican ticket, I’ll also go ahead and tell you he also referred to himself as Mitt Romney every time we played, since that was the last election and the one we spent weeks on end following with our unit study. There was one play during the game that had us laughing so hard, tears were streaming down. Ben drew a Politics card, read it and exclaimed, “I AM Mitt Romney!” The card read:
“You are a Mormon.  Add 2 votes to Utah.”
Of course, I was just happy to know he had paid that much attention to our studies during the last election. I was also happy to realize that the situations on these cards are not random; they are based on the events of past elections. One thing I plan to do is use them for some political trivia research fun for Ben. Rabbit trails, friends . . . it’s how we roll in our homeschool.
Campaigning is done a little differently. If this method of gaining votes is used, all three dice are rolled after the player chooses which three states in which to campaign. Votes are awarded to the number on each die. For example, if a player is campaigning in KY, IN, and OH and the three numbers rolled are 4, 5, and 6, then the player will choose which state gets each number of votes.

While score keeping can be done by using the provided score pad, adding and subtracting votes each round, we found it much more fun to pull up the Webmap on the iPad and keep track that way. A simple tap on the state to change the color and the votes were automatically tallied for us. It felt like we were watching C-SPAN on election night! 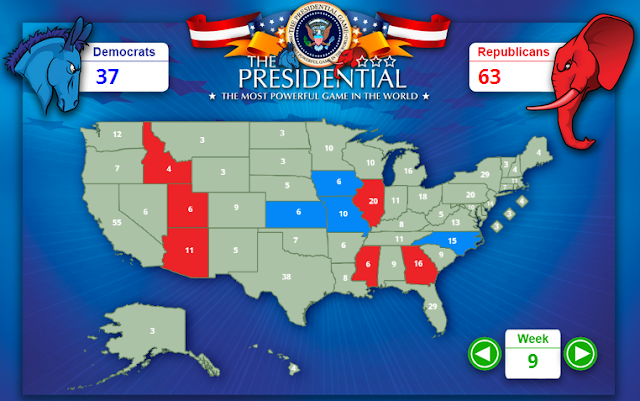 Playing 30 rounds (representing 30 weeks of campaigning) took us about an hour, maybe a little more, each time we played. In addition to rehashing the electoral college (why does the huge state of Alaska have so few votes? and why do we have an electoral college anyway — can’t they just count up the votes of the people?), the game is obviously a great re-enforcer of U.S. geography. Add to that all of the presidential trivia of the past from the Politics cards, and you have yourself a game that is not only fun and entertaining, but a crazy useful tool for homeschooling.
I think by the next Presidential election, Ben will be savvy enough to perhaps write some Politics cards of his own. I’m thinking it could get a little dicey. I’m guessing we won’t be tired of playing the game by then. I’m pretty sure we’ve played it about 25 times already and no one’s interest is waning yet.
The Presidential Game can be purchased for $35.
To read more reviews of this fun and educational game from the Schoolhouse Crew, visit the Crew blog.

« Consequences Aren’t the Only Answer
Heart Parenting: How to train character and stop nagging »