You are here: Home / Product Reviews / Timberdoodle Review — Wordsmith Apprentice
I make commissions for purchases made through links in this post. For more information please see our disclosures page.
Please share!

Wordsmith Apprentice, written by homeschool mom, Janie B. Cheaney, is “a self-directed program for grades 4-6 that will develop appreciation and enthusiasm for written language through imagination-stretching exercises.”
Ben, a sixth-grader, is a super-creative, but reluctant writer. I was thrilled when offered to chance to review this product.
Using Wordsmith Apprentice, Ben enjoyed pretending he was a writer for a small-town newspaper. Because this program is intended to be self-directed, after a quick explanation of the program’s purpose and my expectations, I literally handed the book over to him. I didn’t make assignments other than to mark it down on his weekly assignment sheet every Tuesday and Thursday for the past 6 weeks. The first week, I held my breath. It took a bit of time before he picked it up that first day. I think he was intimidated by the idea of another writing program. So I told him that for the first day, all he needed to do was read the “To the Student” introduction.
That was all it took. Once he realized he got to be a “reporter,” he decided this was going to be fun! He quickly turned the page to read the cartoon from the editor, introducing him to his new “job.” He grabbed a newspaper from Dad’s desk and began exploring all of the different departments — news, sports, entertainment, classifieds, editorials, and then filled out his job application. He was off! 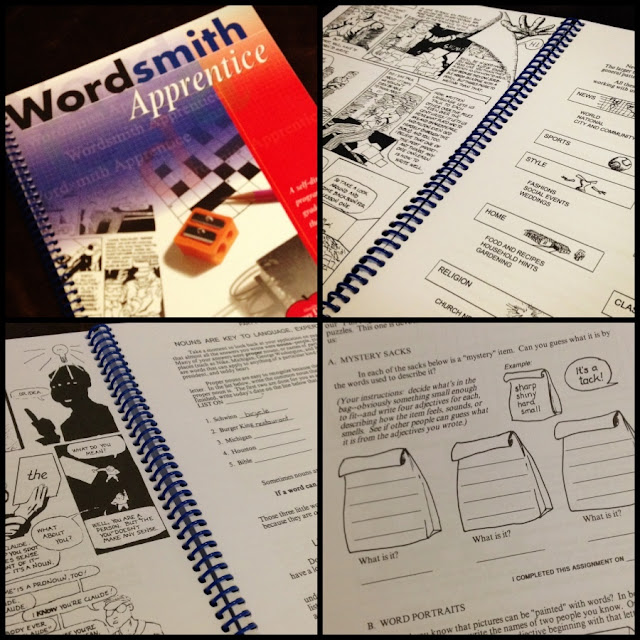 Wordsmith Apprentice begins with the basics of writing — parts of speech, and moves quickly into writing good sentences, and finally paragraphs. The creative ways in which it teaches really grabbed Ben from the beginning. His first “job” after learning the importance of carefully selecting your nouns, was to write a classified ad for 3 things in his room he was going to sell. His ad needed to be less than 20 words. The guidelines were clear and he worked really well within their boundaries.
Each lesson is presented by a cartoon (and what boy doesn’t love that?), with lots of tips and suggestions peppered throughout.
Ben’s not even halfway finished with this course yet, but looking ahead, he will eventually be doing some investigative reporting, hosting a newspaper contest, and writing recipes, as well as sharpening his editing skills. All the while, he’ll be improving his sentence and paragraph writing.
Wordsmith Apprentice has inspired Ben to write by making it fun and interesting. He highly recommends it. And so does his mom!
You can purchase Wordsmith Apprentice from the Timberdoodle website at a cost of $14.50. Timberdoodle also carries many other Language Arts for Homeschoolers,as well as other homeschool curriculum. Be sure and grab their Free Homeschool Catalog while you’re there!
Visit Timberdoodle on Facebook!