You are here: Home / Math / TOS Review: I See Cards–Fractazmic
I make commissions for purchases made through links in this post. For more information please see our disclosures page.
Please share!

Last year, Ben and I reviewed a super-fun math card game, Pyramath, from I See Cards. It was our very favorite review product of the year! Ben still loves playing Pyramath. So when we were given the opportunity to review another card game from I See Cards, we jumped at it!

The card game for this review is called Fractazmic. Fractazmic is a fun and engaging card game that uses math and language skills to teach fractions and measurement. 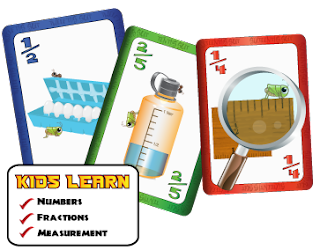 There are several variations of the game, but Trap was one game that Ben and I played several times. The object of Fractazmic Trap is to gather as many hands as possible before the first player runs out of cards. Hands are captured by either (1) playing a card that brings the sum of all cards thrown to 1 or (2) forcing the next player to throw a card that brings the sum to greater than 1. If any of these events occur – the player captures the round and is the first to start the next round. This video will give you a more visual idea of how Trap is played:

I should preface our opinions about Fractazmic with a disclaimer. If you have read my blog much you know that math is not Ben’s favorite or best subject. To be honest, fractions are something we are just now getting started with in 5th grade, beyond playing with simple measurements. So this game was challenging at first. In fact, we began with just playing with one suit of cards at a time, until Ben understood that suit well, then we played with the next suit, and then the next. After several plays we were finally able to put all 3 suits together into one game. In the beginning, Ben was a bit frustrated, but I believe that’s due to his aversion to math, rather than the game itself.

Fractazmic is recommended for grades 1-8, 2-4 players. There really are several adaptations to the game which make it suitable for this age span, though I do believe your students grades 4-8 will get the most benefit.

Fractazmic can be purchased for $6.95 plus shipping at the I See Cards website.

You can the online version of Fractazmic at no cost by following this link.

Several other members of the TOS Crew are playing Fractazmic, so be sure to click over to the blog and see what they thought.

Disclaimer:  As a member of the TOS Crew, I received this product, at no cost to me, in exchange for my honest review.  All opinions are those of myself and/or my son.

« Happy birthday to my boy!
What brings you joy? »