You are here: Home / Blogging through the Alphabet / Winter the Dolphin (a field trip to the Clearwater Marine Aquarium)
I make commissions for purchases made through links in this post. For more information please see our disclosures page.
Please share!

When the movie Dolphin Tale was released, we were first in line at the box office, my animal-lover and me. It took all of about 5 minutes to fall in love with the sweet little dolphin who was caught in a crab trap and eventually lost her tail. If you haven’t seen the movie, we highly recommend it.

When Ben discovered at the end of the movie, that Winter was a real dolphin and that the Clearwater Marine Aquarium in Florida was her real home, he begged to go visit her. In fact, he has asked many times in the past year to go see Winter. I bought that DVD for him for Christmas 2 years ago, and he has watched it over and over again. He also logs on to watch the Winter Webcam at least once a month. There was not a chance he was going to forget about Winter.

Well, it took us over a year, but last week, we managed to get there to visit Winter the dolphin up close and personal. 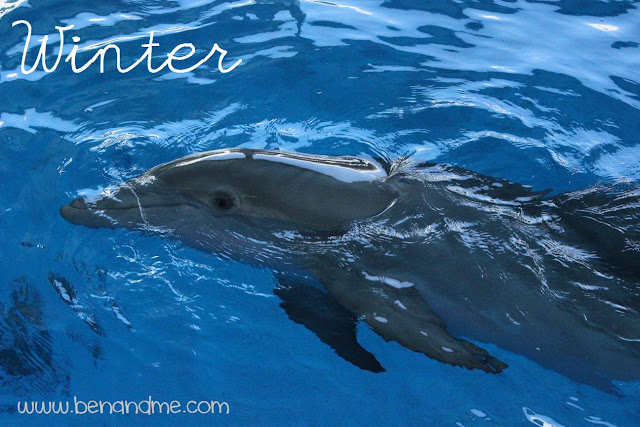 We arrived early, soon after the marine hospital (and that’s truly what it is) opened and immediately began our behind the scenes tour. We paid about $10 extra for this tour, but it was completely worth it. Our tour guide, George Brunner, was amazing. We entered the emergency area where sick or injured animals are first brought. He told us about how this area can be self-contained so that everyone is quarantined to one area, preventing any possible contamination of the rest of the aquarium. George’s passion for the marine hospital is contagious. He shared about the “stranding team.” This is the team of volunteers that goes out to rescue the animals in need of help. He has recently joined this team and is very excited about that!
He told us about the time the stranding team brought back a baby sperm whale. You can see the bottle they used to feed him in the photo below. The smaller bottle is for the dolphins. He also told of some of the true story about how Winter was rescued. The movie takes some creative license in this area, as well as others.
He showed us the turtle area for the turtles that will be released after they heal. They work very hard not to socialize these animals, so they are kept away from everything else and you can only see them from afar. Each of those blue pools you seein the photo below contains one turtle. 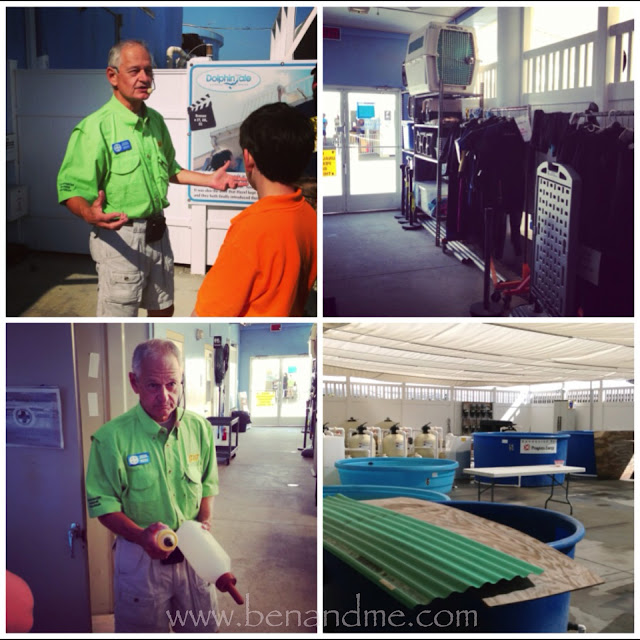 George shared with us about the dolphin diets. Winter weighs in at about 275lbs and eats 13lbs of fish each day. George is showing us here how large the herring are. We were surprised to learn that Winter does not eat herring like the other dophins. Can you guess why? 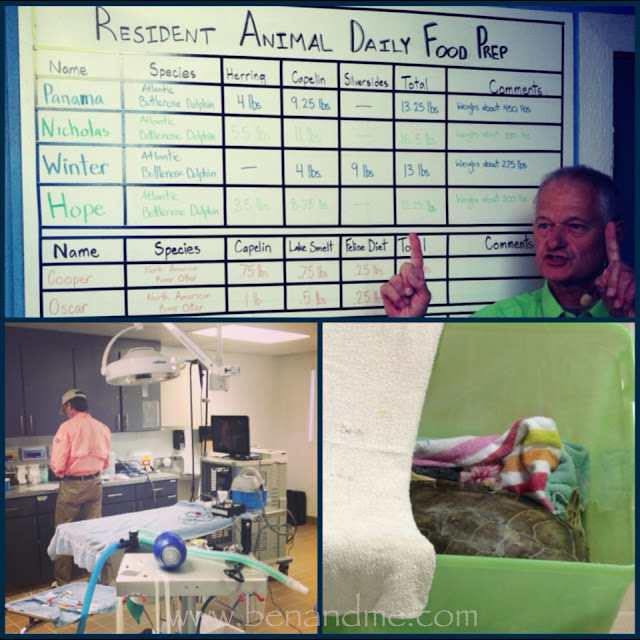 Did you figure it out?
The reason Winter doesn’t eat herring is because she doesn’t like it. How funny is that?
Our next stop was the hospital’s operating room. They were just about to begin a surgery on a turtle. That’s Dr. Walsh, the head veterinarian, in the photo on the bottom left, and the patient on the bottom right. Dr. Walsh volunteers his time to take care of the medical needs of the hospital and is the doctor that treated Winter. In all, about 400 awesome people volunteer their time at CMA. They do have a paid staff of about 100 people, but this place would never run so well without all of the volunteers. They have two main goals here — to care for sick and injured marine animals and to educate folks about the marine animals they care for. All of the animals here were patients first, and cannot be released back into the ocean because it would be unsafe for them.
Once we finished our tour (including the kitchen where hundreds of pounds of fish are prepared daily and the laundry room where incredible mounds of laundry are washed), it was time to finally see Winter! 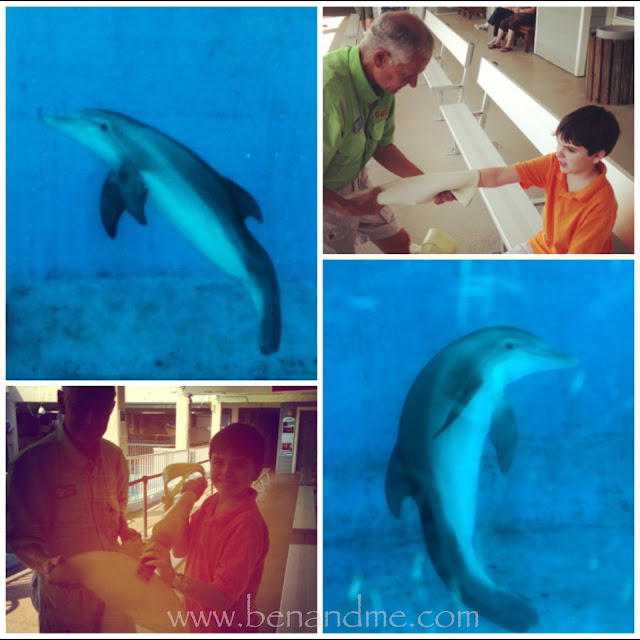 Even though the tour was finished, George sought Ben out (he was one of few children there that day) to share more with him. He brought one of Winter’s socks for him to touch and feel (it’s made of a special gel now called “Winter’s Gel”) and let Ben handle one of the prosthetic tails Winter has outgrown. She was just a baby when she came to live at CMA 5 years ago, so she has outgrown many tails!
There are many other marine animals to view and handle here. Ben got to pet stingrays and hold a hermit crab. There is an actual aquarium with sharks, stingrays, and other fish to watch. We were able to see several training sessions with the dolphins (there are 3 other dolphins who live here — Panama, Hope, and Nicholas), a shark training session, otter and turtle feedings. 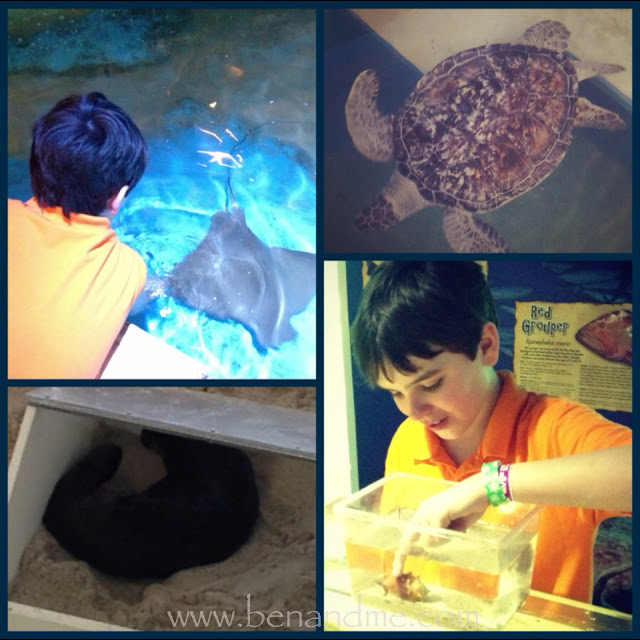 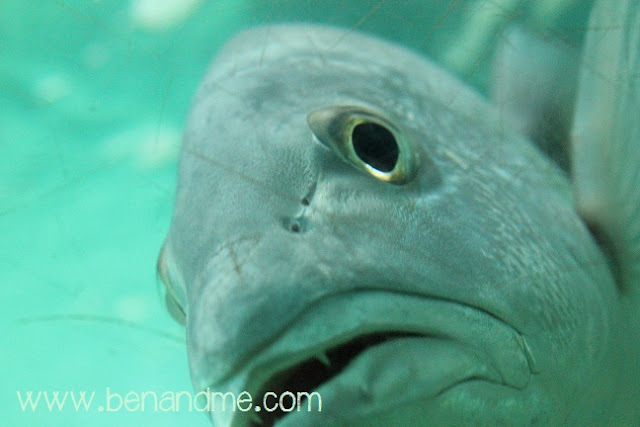 There are staff members and volunteers positioned everywhere to teach and talk, answer questions, and show their enthusiasm for the work being done at CMA. Ben is ready to sign up for summer camps and a college internship. It’s too bad we don’t live closer. He would love to spend time volunteering.
CMA is a small, non-profit marine hospital and aquarium, but very much worth a visit if you’ll be near the Clearwater area. These people love and are committed to what they do. All the hype surrounding the movie has not changed their focus or mission. It’s really very inspiring.
If you’d like to learn more about Winter and dolphins in general, here are a few resources for you:

Winter’s Tail: How One Little Dolphin Learned to Swim Again

Hope for Winter: The True Story of a Remarkable Dolphin Friendship

Island of the Blue Dolphins

How to Speak Dolphin

Heart of a Dolphin

Learn how to draw a dolphin