You are here: Home / Bible / Word Study — Government
I make commissions for purchases made through links in this post. For more information please see our disclosures page.
Please share!

Some of you are wondering what I mean by “Word Study.” Here’s a definition copied straight from www.principleapproach.org: 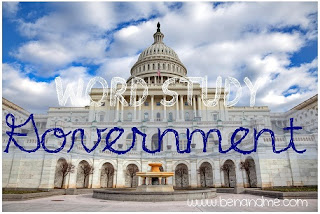 The Word Study: Defining a Biblical Worldview — The word study involves more than going to a dictionary to define a word. It is the method of scholarship that puts the student on the pathway of developing the habits of reflective thinking and deductive reasoning from Scripture. The word study places the truths of God’s Word at the center of all learning, which illuminates the understanding and consecrates the mind.

When doing a Word Study, there are 4 steps:
These 4 steps are commonly known as 4-R’ing in the world of the Principle Approach® and can and should be a tool used by both teacher and student. I will be teaching Ben this method of learning, and some weeks, I’ll blog his word studies as well. You don’t have to be a Principle Approach® homeschooler to do word studies. Obviously, it’s a great tool for everyone!This week’s word for study is GOVERNMENT.
According to the Webster’s 1828:
Government:  n. Direction; regulation. Control; restraint. The exercise of authority. The system of polity in a state; that form of fundamental rules and principles by which a nation or state is governed.
Key Word Definitions:
Direction: Aim at a certain point; a pointing towards, in a straight line or course.
Regulation: The act of reducing to order.
Control: To direct or govern in opposition; to have superior force, or authority over.
Authority: Legal power, or a right to command or to act;  Power; rule; sway.
Fundamental: A leading or primary principle, rule, law or article, which serves as the ground work of a system; essential part.
Rule: That which is established as a principle, standard or directory.
Principle: the cause, source or origin of anything; that from which a thing proceeds.
Government Defined in My Own Words:
A system of power utilizing the right to command and point toward order, based on primary and established principles.
Biblical References:
Let everyone be subject to the governing authorities, for there is no authority except that which God has established. The authorities that exist have been established by God. (Romans 13:1)
And I will clothe him with thy robe, and strengthen him with thy girdle, and I will commit thy government into his hand: and he shall be a father to the inhabitants of Jerusalem, and to the house of Judah. (Isaiah 22:21)
When the righteous are in authority, the people rejoice: but when the wicked beareth rule, the people mourn. (Proverbs 29:2)
And they were astonished at his doctrine: for he taught them as one that had authority, and not as the scribes. (Mark 1:22)
And this is his command: to believe in the name of his Son, Jesus Christ, and to love one another as he commanded us. (1John 3:23)

The Bible is clear that governmental authority is established by God (Romans 13:1). Jesus is the ultimate authority (Mark 1:22) and any rule must be based in love and obedience to His commands (1 John 3:23). Whether speaking of self-government, family government, church government or state government – when the righteous are in authority, the people rejoice, but when the wicked rule, the people mourn (Proverbs 29:2). It is imperative that those in authority, rule based on the principles Jesus has set forth and according to his commandments, so that those under authority are always pointed in a straight line toward Him (Isaiah 22:21). As a parent, this is His command to me as I am in authority over Ben — I must always point Ben back to Jesus in all things.

As a citizen of the U.S., this is His command to me be sure that whomever I vote for is leading a life which exhibits these Biblical principles as well.

Lord, have mercy on us all.