You are here: Home / Juicing Momma / 12 Foods You Should Always Buy Organic (or buy something else) . . .
I make commissions for purchases made through links in this post. For more information please see our disclosures page. 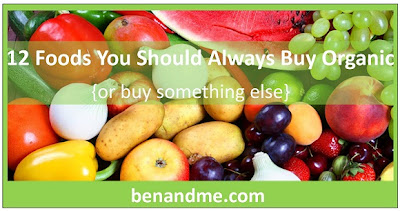 I would love to fill my refrigerator and pantry with nothing but organic foods. But truth be told, I just can’t afford to buy all organic fruits and vegetables, if we are to eat the volume of these foods recommended daily. The best case scenario for me is to attempt to buy those foods that are known to be the most contaminated with pesticides, from the organic food section, and continue buying the foods least contaminated in the nonorganic section.

12 Foods You Should Always Buy Organic

1. Apples: because of the risk of insects and fungus damaging their crops, farmers often use a variety of different pesticides on their apple orchards. The residue of up to as many as 40 pesticides can be found on apples. This also includes applesauce and apple juice. (safer nonorganic alternative: bananas)

3. Strawberries: another fruit that is popular with fungus, more than 50 pesticides can be found on fresh strawberries, while frozen berries have around 15. (safer nonorganic alternative: kiwi)

4. Peaches: another tree fruit heavily sprayed for insects and fungus, peaches have tested for more than 60 pesticides. Canned peaches fair much better, with only 3. (safer nonorganic alternative: oranges)

6. Nectarines: imported nectarines are among the most highly contaminated of the tree fruits. Domestic aren’t as bad, but still do have pesticide residue. Overall, more than 30 pesticides have been detected on nectarines. (safer nonorganic alternative: mangoes)

10. Blueberries: one of my favorite berries, blueberries can be laden with the residue of more than 50 pesticides. Frozen berries are a little less contaminated. Other berries don’t fare much better. All berries should be purchased organic, if possible. (safer nonorganic alternative: none)

12. Tomatoes: with more than 30 pesticides, fresh tomatoes rounds out my top 12 list of foods to buy organic, though canned tomatoes do fair much better. (safer nonorganic alternative: canned tomatoes)