I introduced you all to the Mobile Education Store last summer with this review of their Rainbow Sentences app.

The Mobile Education Store was born from a father’s desire to help his special needs daughter.  Our family had invested thousands of dollars in special education software, and almost always came away from the experience disappointed.  Not only were the programs incredibly expensive, but they lacked the variety of content and engaging play that makes our daughter WANT to play.  We exist to fill the large gap that exists between the availability and cost of commercial special needs software and the needs of everyday parents.

Since that time, this incredible company has given us the opportunity to review 2 more Language Arts apps — SentenceBuilderTeen and TenseBuilder. Watch for my review of TenseBuilder later today!

SentenceBuilderTeen is designed to help teens learn how to build grammatically correct sentences. With 3 levels of play, your student will build sentences based on 100 teen-friendly photos, choosing between photos that will appeal to girls or boys.

Here’s an example of a Level One exercise: 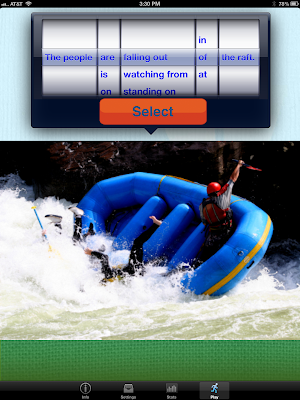 The photos used are just stunning. The sentences are formed by tapping on the correct word or phrase to compose the best sentence. Once the words have been chosen, the student taps “select” and finds out immediately if they are correct. If they are not, they are given the opportunity to try again until they get it right.
There are a couple of options provided, among them,  audio clips for “correct answer reinforcement and/or audio instruction. For example, in the above exercise, the (real, live not computer-generated) voice says:
Audio Instruction: “Make a sentence about the picture.”
Correct Answer Reinforcement: “That’s right. The correct answer is, ‘The people are falling out of the raft.'”
When both of these option are turned off, there is still an audio voice, in the form of encouragement. Some of the encouraging words heard by Ben were, “You are learning fast,” “Tremendous!” and “That was first class work!” when he selected the correct answer.
When an incorrect answer was given, he heard words such as, “You are really trying!” and “That was so close.”
The app slso tracks the student’s progress: 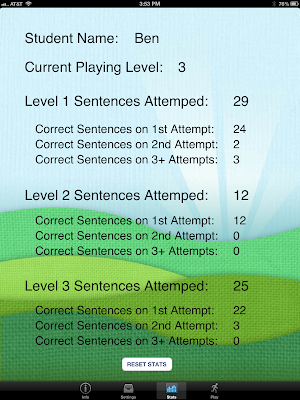 Just so you can see the differences in level of difficulty, here’s a screenshot of exercises in levels 2 (left) and 3 (right): 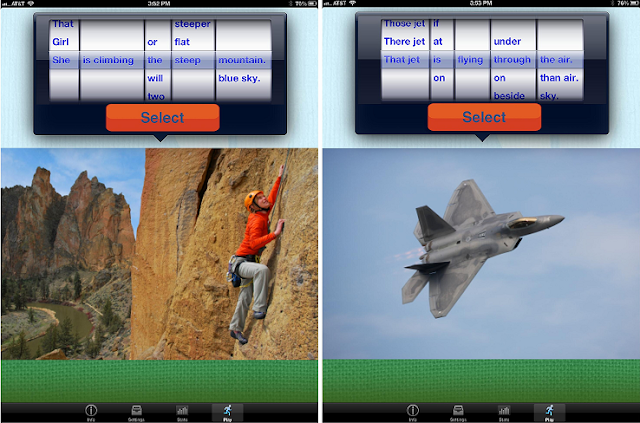 This is a language arts app that is appealing to all kinds of learners — auditory, visual, and tactile (Ben has elements of all 3). Bear in mind that it was developed for children with special needs. For Ben at age 11/12, it wasn’t terribly challenging, but he is pretty advanced in language arts (reading and spelling at a high school level). And he actually does he still does enjoy using it, even if only because it’s fun to compose sentences around such lovely photographs and not have to write them out. It is a great way to introduce/reinforce different parts of speech. While I didn’t have been diagram the sentences, I did have him verbally identify different parts of speech.

Speaking of the photos — because that can be a concern for many — I looked through the app for both boys and girls and did not find much most conservative, Christian families would object to. There are a few on the girls side with clothing that is not as modest as some would like, including mini-skirts, bare shoulders, and short shorts. Here’s an example: 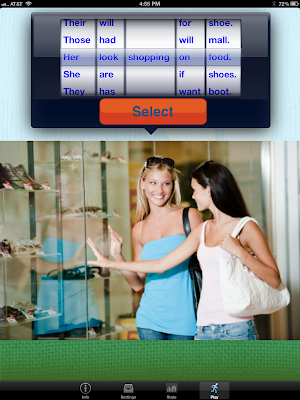 The cost for SentenceBuilderTeen is $5.99 on the Appstore and is compatible with iPad only –iOS 4.3 or later.