You are here: Home / Common Core / Common Core Standards — On Judging Homeschool Companies
I make commissions for purchases made through links in this post. For more information please see our disclosures page.
Please share!

There has been much discussion recently among homeschoolers on Common Core Standards. In fact, there was recently a guest post on this very blog, written by my friend, Valerie..
During the past week, most of the discussion I have seen has turned toward a group of homeschoolers emailing homeschool publishers to ask how closely their educational materials are aligned with Common Core Standards and then adding their names to a database with a judgment as to whether they are intentionally or coincidentally CCSS aligned. Or not.
I do believe it’s important for us to be informed about the curriculum choices we are making, but this focus is missing the mark.
As time has gone on, I’ve grown increasingly uncomfortable with the focus of Common Core discussions aimed at homeschoolers moving toward alienating certain companies, even going so far as to call for boycotts, rather than educating homeschool families and the general public about why we should even care about Common Core. The scare tactics have worked in regards to creating a situation where uninformed homeschool moms are making curriculum decisions based on this database. But I have to wonder . . . do they even know why CCSS is an issue? And more importantly, should we judge homeschool curriculum companies based on Common Core Standards if we don’t even understand the true dangers of CCSS? 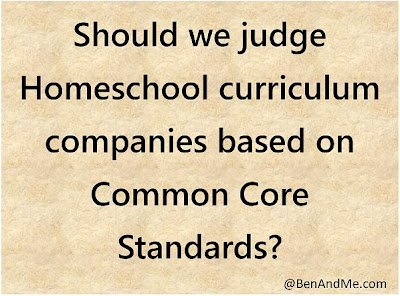 Let’s ask a few of these questions instead:
How did we even get to this point in the U.S.?
And how can we begin educating those we know who are using public and private schools about the danger of Common Core Standards?
How can we let our government officials know where we stand on this issue?
It’s time for us to learn more and stop the knee-jerk reactions.
Today, the Foundation for American Christian Education made a portion of it’s Foundations course available to the public — History of Education in the U.S.A. — free of charge. I have listened to this in the past, as I worked through this course myself, and I think it will be beneficial in helping people understand why we are even discussing having Common Core (and other standards) in our public educational system.
I beg of you — watch this course, work through the study yourself, and educate yourself. Then focus your time and energy on educating others, so that real change can happen.
You can also learn more about CCSS in this video series: Stop the Common Core. Watch the first of the 5 videos:
While we should all be judicious when choosing which homeschool companies to support with our dollars, we must be careful not to judge the hearts and motives of others harshly, based solely on whether or not their curriculum happens to align with Common Core Standards.
It is ridiculous for anyone to expect that companies that depend upon the government school system to feed their families NOT align. And honestly, most of these companies haven’t changed a thing. They have always based their curriculum on some kind of state standards. Homeschoolers didn’t mind that before. Why is it such an issue now? Just because they’ve been added to a list?
Boycotting companies that align does absolutely nothing to fight the actual problem — the violation of the Constitution and bribery of poor and bankrupt states by our federal government. Boycotting homeschool companies is equally as ridiculous, especially when alignment is purely coincidental. Or because they refused to answer questions for a database, preferring to speak one on one to address the concerns of their customers.
We are all learning here. And grace is important. What we don’t need is division in the homeschool community over an issue that should unite us. There may be a battle on our hands, but that battle is not with homeschool curriculum writers and publishers or even with those publishers popular with both government schools and homeschoolers. It’s with our state legislatures (and ultimately the Federal Government).
If you do have questions about a curriculum you use or are thinking about using, I highly recommend discussing your questions and concerns directly with the company with which you are doing or potentially doing business. And if you think they don’t have a good grasp on the dangers of Common Core, perhaps you’ll have the opportunity to educate them, too. At the very least, you will have made an informed decision.
Making a decision not to use a certain company’s curriculum solely based on what you’ve heard or read is their Common Core stance does nothing to help the cause.
And that cause, my friends, is the cause of freedom.
For more information visit this page on the HSLDA website.
Please share!