You are here: Home / Juice Recipes / The Juice Fast (Day 3) Kid-Friendly Green Juice Recipe
I make commissions for purchases made through links in this post. For more information please see our disclosures page.
Please share!

Day 2 went really well. Yesterday, I drank pretty much the same amount as day 1 — 1 quart of green juice, 1/2 quart of carrot juice and 1 1/2 quarts of water. I am not feeling hungry at all yet. And surprisingly, I don’t have a headache, nor have I had any mood changes. I attribute that to good preparation. I think eliminating gluten, dairy, sugar and caffeine from my diet 2 weeks before I began the fast, and easing into fasting by juicing twice a day while still eating for several days prior to beginning, has made a difference in the way my body is reacting to juice fasting.
I think preparation — both mental and physical — is key to juice fasting successfully.
Today, I want to talk a little more about sleep. In my nursing career, I spent many years working the nightshift. I came home full-time 3 years ago, because I homeschool my son, Ben, and it was getting hard working nearly full-time and homeschooling. The problem is . . .  I have struggled ever since with sleep issues. My circadian rhythm is completely out of whack. Recently, with these changes in my diet I’ve mentioned, I have begun seeing some improvements with this. Instead of getting to bed at 3 or 4am, it’s been closer to 1 or 2am. And for the past week, since I started juicing (even before I began the fast), it’s been closer to midnight.
This is all good news, but what I really want to share that is super encouraging to me is how much sleep I got last night and the night before. Nine hours! That’s a lot of sleep for me. I usually only get 5 or 6. Last night I even had dreams that I could remember when I awoke this morning. I can’t even remember the last time I remember dreaming. I think it has to be the juice helping there. This was a side effect of juicing I had not even considered, but I am very grateful!
Speaking of Ben (well, I did mention Ben), I am wanting him to get on board with the juicing thing. Being 12, he has a mind of his own when it comes to this. He is pretty good about eating a fairly healthy diet. After watching Supersize Me, he stopped asking to stop for burgers and chicken nuggets at McDonald’s at least. He’s great about eating fruit and salads, too. He does have a sweet tooth though, and although I keep that under pretty good control by not bringing a lot of sweets into the house, it could still be better. I think juicing would help him get rid of some of those cravings. And, I really want him to drink the juices I’m making without me having to sneak them into a sweetened smoothie (like I did a couple of days ago). I wouldn’t have him fast, don’t worry about that, I just want to add some good nutrition into his growing, almost-a-teenager body and help curb that sweet tooth.
He does like the carrot-based juices ok, but until yesterday, he would only smell the green juice, barely get a drop on his lips, and then make the “I’m going to vomit” face. So I decided I would attempt a more kid-friendly version of the green juice yesterday.
I used milder greens, substituted the lemon I usually use with orange, left out the ginger, and used a sweeter, golden delicious apple. This juice has a very mild taste, not at all bitter or acidic, and is slightly sweet. Ben did drink about an ounce of it before stopping. Later in the evening, he drank another ounce of his own accord. That’s a big improvement over the vomit face, so I’ll take it and we’ll try again another day.
I think this would also be a good recipe for those of you just starting out juicing who are opposed to the stronger-tasting green juices. Like my friend, Tina 🙂 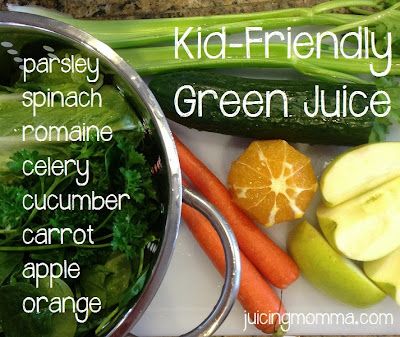 Here’s what I juiced:
a large handful of baby spinach
1/2 a head(?) romaine lettuce
3-4 springs parsley
2 ribs celery
1 cucumber
2 carrots
1 golden delicious apple
1 navel orange, peeled
This made right at a quart of juice. I’d love to hear about it if you do try this juice with your kids.
Here’s a tip for you — serve your green juice over ice. It will be even more refreshing!
Please share!