You are here: Home / Real Life While Homeschooling / Real Life {While} Homeschooling — Sticks, Stones, Broken Bones, and Homeschooling
I make commissions for purchases made through links in this post. For more information please see our disclosures page.
Please share!

During my blog hiatus, I am introducing a new series of guest posts — Real Life {While} Homeschooling. 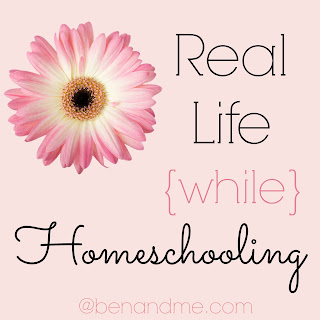 Over the next 4 weeks, I will be introducing you to 9 inspiring friends, who are homeschooling with some kind of real life challenge. I know that you will be as blessed by their stories as I am by knowing them.
Today, please welcome Carol Anne!
*****************************
In retrospect, I guess I knew something was up. For several weeks, the chant, “Life changes in an instant,” echoed in my soul.
I passed a burning house and thought, “Oh, my! Life changes in an instant.”  The unexpected death of a young homeschooling mom of six left me shaken. “Life changes in an instant.”
I reminded God. “I’ve never taken your protection for granted. I remember to thank you every day.”
If I were honest, I hoped my reminder would insure he treated me like a teacher’s pet – favored one who kept chaos at bay with my thankfulness.
I was in a hurry. School traffic would stretch my ten minute commute to the grocery store to almost an hour.
I dashed out to the car in sweats thinking no one would notice I had neither showered nor put on make-up.
I looked down the hill. The lawn mower was still out from the day before. With rain moving in, I needed to get it into the shed before I went to the market.
I threw my stuff onto the car seat and headed down the hill. Only this time, I didn’t take the safe route I yelled at others to take. I took the apron of the hill – the apron covered in bits of gravel that looked like scree on Mt. Everest.
Three steps and with everyone I asked myself what was I thinking to be so careless. Only three steps. Life changes in an instant.
The laws of physics being what they are, I knew I had broken both them and my ankle as I flew head over heels down the hill.  I was half right. I broke my ankle and leg. 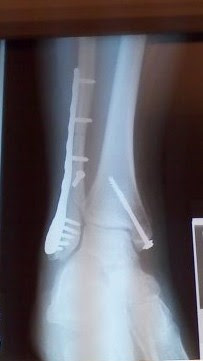 The mist became a sprinkle. I thought the boys would miss me  and look out. “No, they know I’m at the grocery, and traffic will delay me,” I realized.
I yelled and screamed. I tried to scoot on my bottom up the hill. I loosened the laces on my shoe knowing it would have to come off but unable to make myself do the deed. It was forty-five minutes before the ambulance arrived.
My husband lived five hours away because of the shattered economy. It was just the boys and me when life changed in an instant.
I was in a wheelchair and then walker for twelve weeks. We lived in a three story house. You can see the predicament, right? 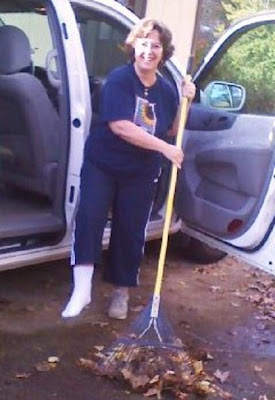 The fog of war is over. I see things I could not see then. I see how I began preparing for chaos even before I was aware of life changing in an instant all around me.
Six months before my tumble, I had learned to coupon. I felt awkward in my efforts to track sales, coupons, and by one get one deals. I had no idea my clumsy efforts would provide for us the nine weeks I could not drive.
My homeschool community launched a relentless campaign providing meals for us every other day for six weeks. Six weeks. Even now, I want to cry thinking of the dedication.
I thought of all the times I had done the same for someone else. It was never convenient and had always, frankly, felt like a hassle. I slapped on a smile and did it anyway.
Never, ever miss an opportunity to deliver a meal to a mom in crisis. The next meal may be yours because life changes in an instant.
School days became school daze. Between the fall and surgery three days later, I wandered in and out of pain medicated sleep to check math, correct grammar, and assign the next thing. I did not, could not, stress over the delays in the schedule I had envisioned before the fall.
We took the week after surgery off while I figured out a new routine. There were lots of things to figure out like how to get from the bottom to top floors for a shower. For weeks it was too exhausting to think about school beyond doing the next thing.
If I did anything to prepare us for what I didn’t see coming, it was to teach two sons how to complete chores that others might consider ‘woman’s work’.
My thought was they’d need to keep an apartment as a single guy one day and then, perhaps, help a wife with a new baby even.
Their dad covered the manly-men stuff, but I just couldn’t shake the feeling of needing to prepare them to take over a home just in case. Little did I know?
They took turns doing laundry and kitchen chores. They cleaned a bathroom a piece, and kept their rooms from becoming hazmat zones. When needed, they prepared simple meals. My older son did grocery runs when staples ran out.
I wish I could say I did lots of brilliant planning and preparing because I’m just that smart. I’m not. God was gracious. He set things in motion I never saw moving. He did it because life changes in an instant, and he sees that coming before we do.

Carol Anne has homeschooled two Aspies for sixteen years. Her older son traveled to Australia and China on business before his 21stbirthday. He is now the Digital Strategist for an advertising agency. Her younger son is a Fencer who participated in the 2013 Junior Olympics. She is a blogger for Home Educating Family as well as Teach Them Diligently and currently blogs at Confessions of a Fraidy Cat.

Delivered by FeedBurner
©2007-2013 Ben and Me. All rights reserved. All text, photographs, artwork, and other content may not be reproduced or transmitted in any form without the written consent of the author. https://www.benandme.com