You are here: Home / Curriculum Reviews / Schoolhouse Crew Review: Dayspring Christian Academy and The Pilgrim Story
I make commissions for purchases made through links in this post. For more information please see our disclosures page.
Please share!

“It is a fact that they landed — and remained — that matters, not where they landed. Yet it is no bad thing for a nation to be founded on a rock.” (Rose T. Briggs)

Dayspring Christian Academy is a Christian school in Mountville, PA, built on the model of the Principle Approach method of education. The Principle Approach is America’s historic method of Biblical reasoning which places the Truths (or principles) of God’s Word at the heart of education. Each subject is predicated upon God’s Biblical principles and students are taught to think and reason from principles and leading ideas using The Notebook Method to Research, Reason, Relate and Record (www.principleapproach.org).
Recently, Dayspring Christian released their first online course for homeschool, The Pilgrim Story. Written by Mary Stauffer, a teacher at Dayspring, The Pilgrim Story teaches the true history of the pilgrims, using original documents. The course is self-paced, using an interactive slide presentation with audio lectures. Also available are printables used to create a student notebook. I received the full course with 6-month access. The usual cost for this history course is $99. 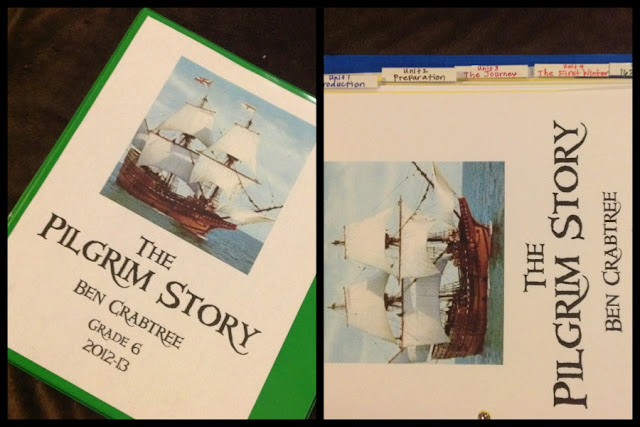 This is not your typical Thanksgiving pilgrim story. This meaty history course will help your students understand not just how the pilgrims came to the new world, but why they came, how they sacrificed, and on whose authority they stood along the way.
Written with grades 3-6 in mind, The Pilgrim Story is divided into 5 units:
Unit 1: Introduction
Unit 2: Preparation
Unit 3: The Journey
Unit 4: The First Winter
Unit 5: 1621-1623
Within each unit, we discovered several lessons, a worksheet for each lesson designed to help Ben follow along during the lecture, vocabulary words, quotes from original sources, mapping and other activity sheets and crafts. The printables are very nicely done. Really beautiful, in fact. Each lesson is designed to be completed in 30-45 minutes. 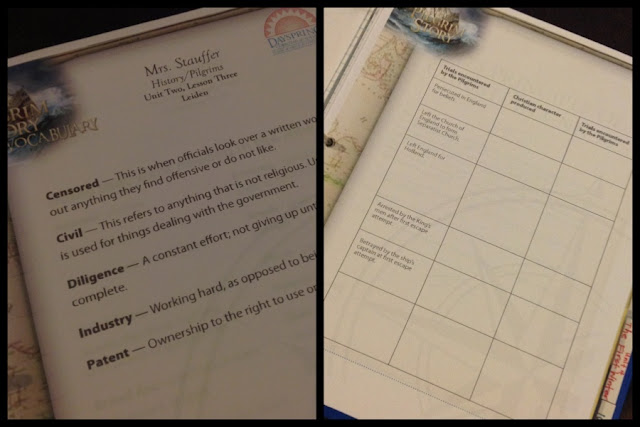 The hallmark of the Principle Approach and this course are the biblical principles taught. The principles in the first two units we were able to complete include: 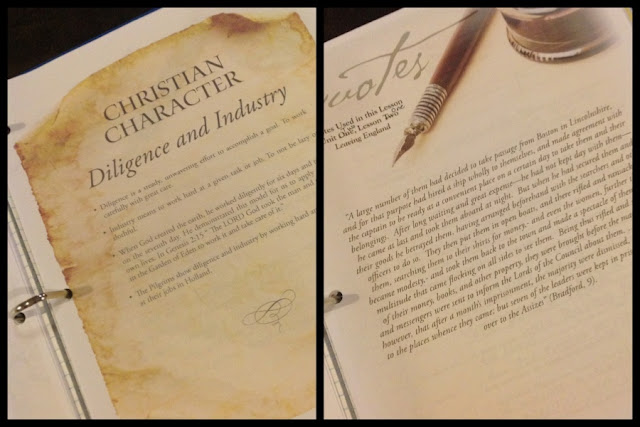 From the very beginning, we knew this was a different kind of Pilgrim story. It began with King Henry VIII and his reasons for starting the Church of England (he wanted to divorce his first wife because she had not given him a son, but the Pope would not grant him this divorce), from which the Pilgrims eventually will escape. During this first unit, Ben also learned about the significance of the Geneva Bible and explored why he believed we should all be able to study the Bible for ourselves. He loved the Greek translation project and was challenged by the activity designed to make him think about his internal property. All of this was information pondered long before getting the part where the Pilgrims actually boarded the Mayflower, but it showed God’s providence leading up to their journey.
One of my favorite assignments had a list of trials encountered by the Pilgrims. Ben had to decide which Christian characters each trial would have produced and explain why. For example, one trial listed was, “Left the Church of England to form Separatist Church.” Ben chose “liberty of conscience” as the character trait produced, with the explanation of, “the Pilgrims disagreed with the church, so they broke the King’s law in order to follow God’s law as they understood it from reading the Bible themselves.”
Wow! That took some real thinking on his part and that’s what I love most about The Pilgrim Story. Taking a familiar story that usually conjures up images of people dressed in odd black and white clothes with big buckles, eating turkey with the Indians on the first Thanksgiving, into a true story of God’s providence in the lives of a people who risked everything for their faith — does it get any better than that in the Christian homeschool? I don’t think so. This is what it means to teach from a biblical worldview.
Ben has thoroughly enjoyed The Pilgrim Story as well. The audio/visual format, along with the notebooking activities have been the perfect combination for him. It’s very similar to the way we already homeschool, so it was an easy fit for us. The lectures kept his attention, especially with the aid of the worksheet filled out during the lesson. There is built in review with each lesson, and each unit ends with the option of either a multiple choice test or optional essay. So far, Ben has taken the multiple choice tests, but I’m thinking of switching that up in future units. One thing I have realized during our time with this course is that he is capable of much more than I have been expecting from him. I believe he has surprised himself as well. There is also a book recommendation list. Several have been added to our book basket for required and free reading. 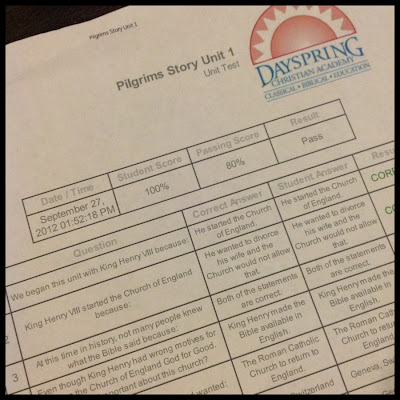 The course culminates in a virtual field trip to Plymouth, MA, led by Ms. Stauffer, the author of this course and an expert on the Pilgrims. We enjoyed this pictorial/narrated tour of “America’s home town” and now look forward to visiting there live and in person very soon.
The Pilgrim Story makes it easy to be sure you are homeschooling from a strong biblical worldview. For anyone who is interested in the Principle Approach method, it’s also a great starting point to help you understand what exactly that looks like.
You can purchase your 6-month access to The Pilgrim Story for $99 by visiting the Dayspring Christian Academy website. While the website states the course is for grades 3-6, I would not hesitate to use it up through the 8th grade. While Ben is perfectly capable of working through this course independently, it has been a joy for me to participate along with him.
Thank you Dayspring, for the opportunity to use and review The Pilgrim Story. We are very grateful.

Disclaimer:  As a member of
the TOS Crew, I received this
product, at no cost to me,
in exchange for my honest
review.  All opinions are those
of myself and/or my son.