You are here: Home / 4th Grade / Snake Handlers!
I make commissions for purchases made through links in this post. For more information please see our disclosures page.
Please share!

When I was a little girl, living in Miami, I sometimes caught little garden snakes in the backyard.  Like any good little girl, I would proudly carry them into the house to show (read: scare to pieces) my Mommy.    I never understood Mom’s reaction…usually a terrified scream, quickly followed by a stern command to “get that snake out of the house!”

Then I grew up.

Sometime between the ages of 6 and 26, I developed my own distaste for these slithering creatures.  Most trips to the zoo result in Ben visiting the herpaquarium with a friend, while I wait outside.  I’m not really afraid of them, I just can’t get past the ick factor.

On the other hand we have Ben.  Being the creature-loving child that he is, Ben loves snakes. But he has a bit of fear of them. Any opportunity to touch or hold a snake has left him wishing he could muster up the courage,  and regret that he just couldn’t get there.

So yesterday, on the way to co-op, we were discussing that a snake collector, homeschool dad, Todd Wells, would be visiting.  There would likely be opportunity to touch and handle snakes.  So I asked Ben, “do you think you’ll hold one this time.”  His response?  “I will, if you will.”

Yes, the kid challenged me.  So I promised him, if he would hold a snake, I would as well.  Given past experience I thought I was safe.  As you can see, I was not…..

He started slowly…just a touch, and with the smaller snake (a Pueblan Milk Snake, native to Mexico), but soon he was holding it and was ready to move on to the larger Black Rat snake (unfortunately, native to Kentucky). 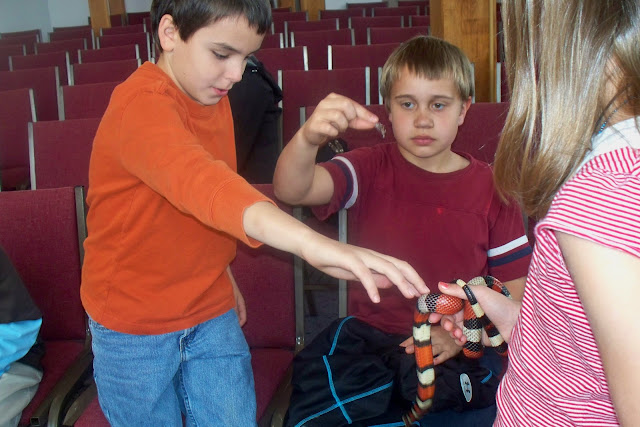 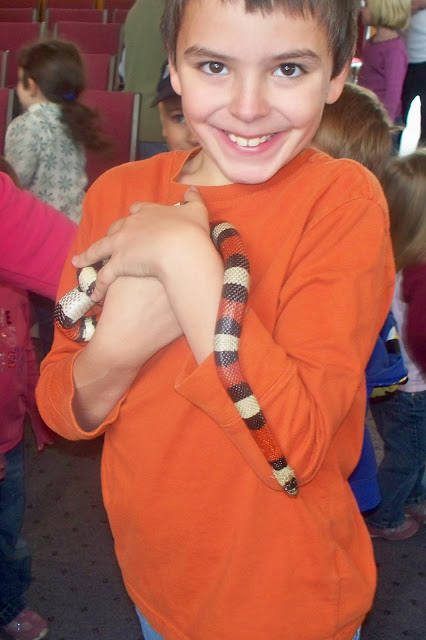 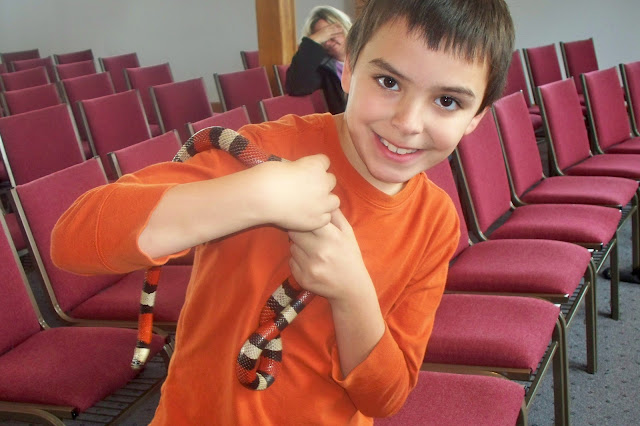 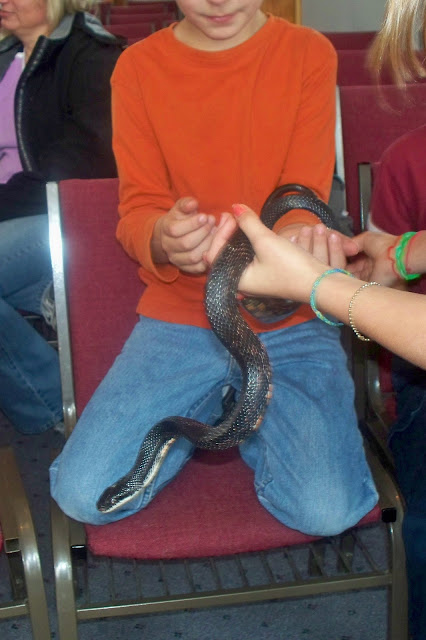 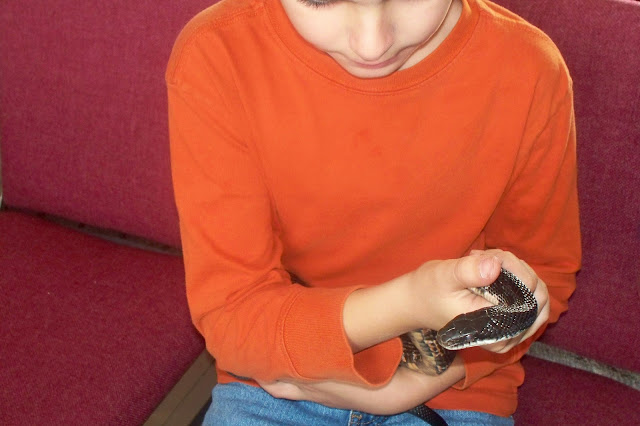 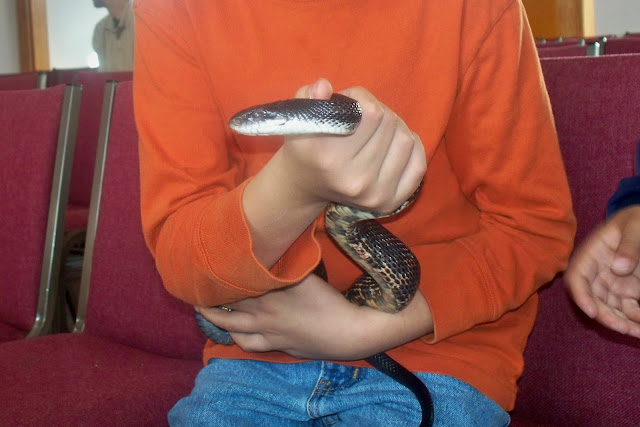 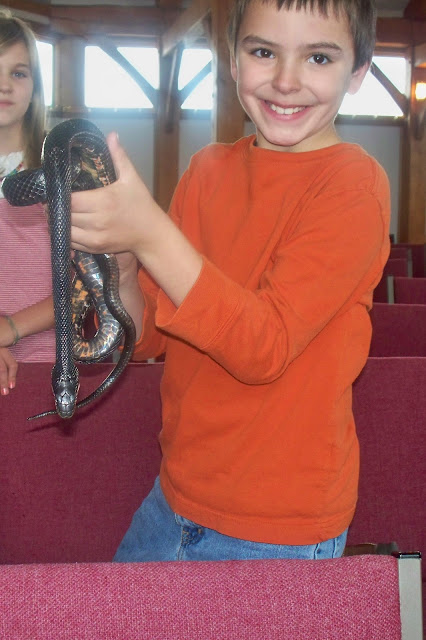 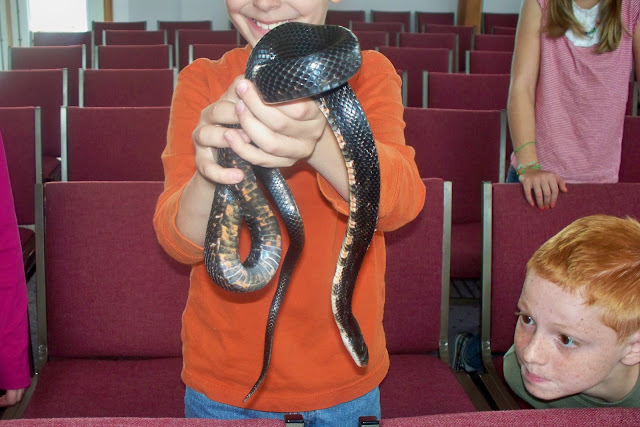 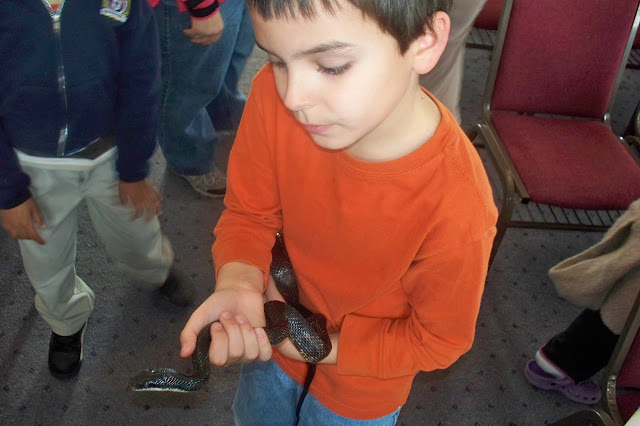 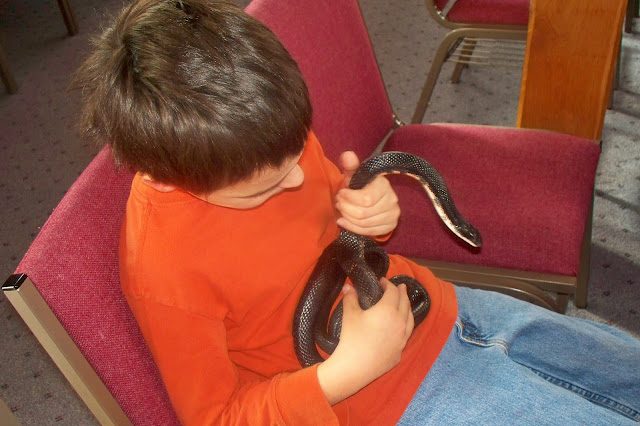 As you can see, eventually Ben was very relaxed and comfortable handling the Rat snake.  I was hoping he would forget the challenge, but no such luck.  As Mr. Wells was beginning to pack up, Ben bopped right up to me with that sparkle in his eye that let me know what question was to follow:  “so Mom, when are YOU gonna hold one of the snakes?  You said you would if I did!”
So yes, I held the smaller of the 2, just long enough for a picture (well, 2 pictures, because my friend accidentally took the first one before I could get past the ick and smile).  I knew I would need a picture later on for proof.  My husband was never going to believe this…. 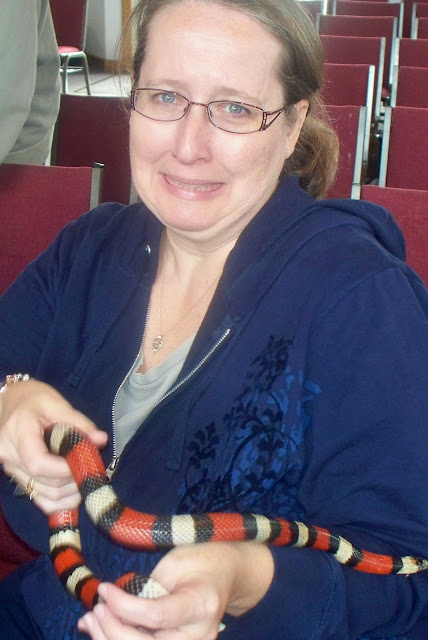 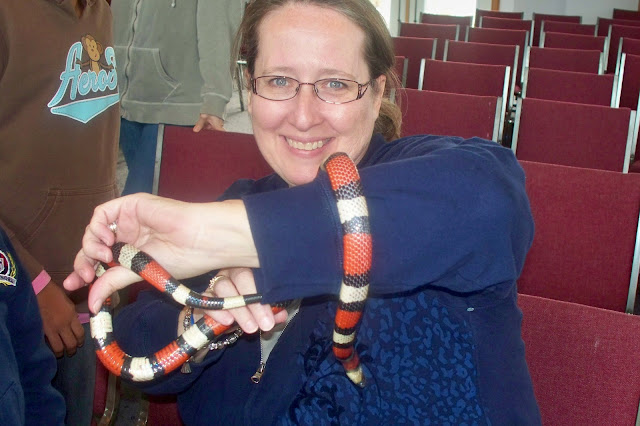 So there you have it.  I was able to suppress the ick factor for about 30 seconds, and in exchange, my son was able to overcome his fear.  It was worth it, but don’t ever expect to see it again.