You are here: Home / 10 Days of Heart Parenting / Consequences Aren’t the Only Answer
I make commissions for purchases made through links in this post. For more information please see our disclosures page.
Please share!

Have you ever had one of those moments when someone said something that left you uttering the words, “well, duh!” I’ll warn your now — I may write this more than once in the next two weeks — but this chapter was one that smacked me upside the head.
I eluded to it yesterday when I wrote these words —

. . . sometimes the punishments just became harsher and harsher because, well . . . many times the lesser actions didn’t do a thing.

For years this is how it worked at our house — Ben would act out in disobedience (or impulsivity), and I would administer a disciplinary action. Some time later (hours, days, weeks later), he managed to repeat the exact same infraction. Remembering that I had just disciplined him for this act, I would then administer an even harsher punishment, because surely if the punishment were more severe, he would remember next time not to do it again. Nope. The cycle repeated itself until the poor child was left with nothing to do, nowhere to go, and no one to see. Sometimes for days or weeks at a time. I found myself repeating to friends quite often that “no punishment matters for this hard-headed child.” In my ignorance, I really believed that he so much wanted to do exactly what he wanted, that whatever punishment I dished out was just worth it to him.
Here’s the thing. If you always go first to discipline and never address the heart issue behind the disobedience to begin with, well, as they say — if you keep doing the same thing, you’ll keep getting the same result. It’s crazy. Literally. We all know what Albert Einstein had to say about this — 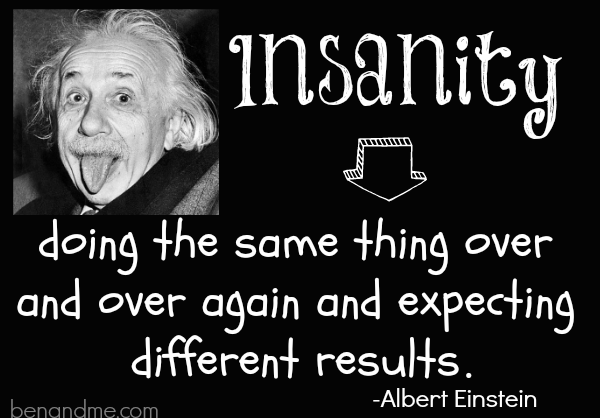 One thing I’ve learned in parenting this highly spirited child of mine is that he needs time to mature into understanding the nuances of cause and effect. This is completely normal. Motivating him to behave with harsher and harsher punishments might bring about pain for him, but it’s not heart pain, if you know what I mean. And it’s certainly not heart changing.
While consequences are often necessary, because frankly God has built that form of loving discipline into his own plan for us, it’s not the only thing. It’s not even the main thing. It is imperative that we couple those consequences with actions that help our kids change from the inside out.
Keep the main thing the main thing.
I’ll give you some ideas of how this looks these days at our house.

Sometimes a do-over is a better option.

For example,  Ben might tell a lie (ironically, this usually happens to avoid being punished). He knows it’s a lie, I know it’s a lie, and he knows I know it’s a lie. Rather than swiftly moving to discipline, I’ll offer him the chance to start over. I’ll say something akin to, “Ben, you and I both know that you did not tell the truth just now. You have made a commitment to be a truth-teller, so I’m going to give you a chance to start again and tell the truth.” Almost every time, he will confess his lie, tell me the truth, and immediately apologize and ask for forgiveness. This has led to so many opportunities for conversation, repentance, forgiveness, digging into the Word, and ultimately changes in Ben’s heart as he moves forward as a truth-teller.

Sometimes we assume our kids know the right thing to do. How can they not? We’ve been telling them when they’re doing it all wrong for years. But knowing what’s right and doing what’s right are two different things. And as we all know, practice makes perfect. Whether it means asking Ben to repeat what he just said more respectfully, or to close his bedroom door without slamming it, having him practice doing what’s right after we’ve just told him he did wrong has been very helpful in affecting real change.

Sometimes, consequences do need to happen. In the past, I was fairly random about this. I might choose to ground Ben for a week, or from one event, or perhaps take away his gaming privileges for a few days. When the time was up, all was restored and life went on until he messed up again. What I noticed was that while he might be angry about this at first, after a couple of days without his Wii it really didn’t matter much to him. Having his Wii-gaming privileges restored required nothing but a smidgen of patience for him to get through this period of time, because he knew the time would soon end. Nothing really had to change.
Now I keep these periods of consequences more open-ended. Instead of taking away the Wii  for a week, I keep it until I see positive changes in his behavior. Because it’s likely that the poor behavior will pop up again fairly quickly, we are often bless with the opportunity to discuss it again and relate it back to the consequences he’s currently facing. Again, more opportunity to chat, have do-overs, and practice right behavior until such a time the privilege can be restored, not because he was patient enough to wait it out, but because he made real, heart-deep changes.
Just remember that although consequences are sometimes necessary, they shouldn’t always be the first line of defense, and never should they be the only one. We want real change in our kids’ hearts. We want them to do the right thing for the right reason, not just out of fear for the consequences or for yet another quick test of patience.

Do not merely listen to the word, and so deceive yourselves. Do what it says. Anyone who listens to the word but does not do what it says is like someone who looks at his face in a mirror and, after looking at himself, goes away and immediately forgets what he looks like. But whoever looks intently into the perfect law that gives freedom, and continues in it—not forgetting what they have heard, but doing it—they will be blessed in what they do. (James 1:22-25)

10 Days of Heart Parenting is a series God laid on my heart after I read the book, The Christian Parenting Handbook by Dr. Scott Turansky and Joanne Miller, R.N. Be sure to click over to read the other installments of this biblical parenting series.