You are here: Home / 5th grade / A lesson in disobedience . . . or is that obedience?
I make commissions for purchases made through links in this post. For more information please see our disclosures page.
Please share!

One of my main goals for our homeschool this year to make the study of God’s Word a main focus. Ben accepted Christ and was baptized this time last year. I want him to be grounded in the Word, and in what we believe as Christians. He has a heart for God, but, like many of us, his behavior doesn’t always reflect that. 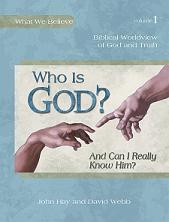 We are using Who Is God, the first book in the What We Believe series from Apologia, as our study guide. Today, we were discussing how God is truth and that He reveals His truth to us through His creation, through His Word, and through the life of Jesus. The question was posed: “Will you choose to build your life on the Rock and follow Him? Or will you choose to turn away from Him and disobey.”


And there was that dreaded word–disobey. Ben hears about obedience and disobedience a lot, as do most kids, I suppose. But I think this was the first time that disobedience was posed to him as the opposite of choosing to build his life on the Rock–God.


We have discussed disobedience as sin. But we all sin, right? So he would repent, ask for forgiveness and go on, never realizing the far reaching effects of his disobedience. Or better yet, the far reaching effects of obedience–righteousness and peace. He only thought about the immediate consequences, the disciplinary action, and determined whether or not he thought it was “worth it” to continue on with his poor choice. I believe that today, he understands that there is eternal reward to the discipline of God’s children, and the resulting obedience.

And have you completely forgotten this word of encouragement that addresses you as a father addresses his son? It says,

“My son, do not make light of the Lord’s discipline,
and do not lose heart when he rebukes you,
because the Lord disciplines the one he loves,
and he chastens everyone he accepts as his son.”

No discipline seems pleasant at the time, but painful. Later on, however, it produces a harvest of righteousness and peace for those who have been trained by it. ~Hebrews 12:5-6, 11

A lesson not just for the little ones, I might add.